The weather was appropriate gray, cold and blustery in Toronto last Friday for the release of the annual REALPAC/MSCI 2016 results of the IPD index. 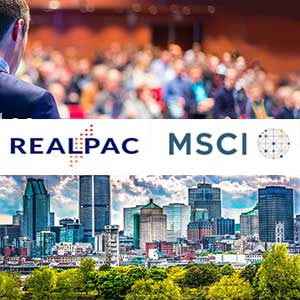 Jokes from the stage about real estate executives visiting their cardiologists preceding some heart slowing results: the index produced a total return of just 5.7%, down from the 2015 return of 7.3%. The IPD Index’s income return also hit an all-time low of 4.9% (compared a year-earlier 5.2%).

“The 5.7%, if you exclude the financial crisis, is the lowest return that we have seen in literally decades,” said Simon Fairchild, executive director of MSCI. In fact it was 1995 when returns were that low.

Unlike 1995, returns are not low because property values are falling. “Returns are low because yields are low,” said Fairchild. “They are now sub-5%” describing that as “the new norm.”

The IPD dataset is a pretty accurate snapshot of the Canadian RE market, making up roughly half of the professionally managed market, with the rest (not measured) being the publically traded REIT market which incidentally handily outperformed IPD’s 5.7% total return in 2015.

There will be blood

It was left to REALPAC president Michael Brooks and a panel of three real estate executives to puzzle out what the disappointing results of the index really mean.

Suffice to say there was no high-fiving onstage.

“Five point seven percent, it has been a lot of years since I have seen a number that low,” said Brooks, kicking off his panel discussion.

Focus quickly shifted to Calgary, which produced the worst poorly performing office market in the country (Calgary commercial RE as a whole produced a negative 7.7 return for 2016 for all assets classes in the index). “More blood to come” in terms of lower leasing rates and property values was the takeaway message for Canada’s energy capital.

“I think we are testing a bottom on leasing, and there is a lag, there is more to go on the valuation side,” said Vince Brown, president and CEO of Triovest. “We have a fairly large Alberta portfolio and we are starting to see some activity but the level that you have to be at to capture tenants in that market has radically adjusted downwards and I am not sure that that has flowed all the way through to the evaluation cycle yet.”

In the wake of the decades-low return numbers, Brooks asked the panelists whether the chilly environment will “kill” development?

Not necessarily, said Triovest’s Brown, who pointed to the rising complexity and lengthening timelines of his firm’s development projects. “When you commit to one of these projects you are making a long term bet on that particular market and that particular product in that market. So I’m not sure that the one year results are going to sway that. Will they add another factor to new projects getting approved? Potentially, yes.”

Fiera Properties’ McCreadie said the bigger issue may be how much money is going to flow into real estate in Canada versus other alternative investment destinations for institutional capital such as infrastructure, agriculture and timberland. “We are underperforming, pretty much other than bonds, all asset classes. That is something that we haven’t been used to for a long time.”

Pierre Bergevin, managing partner of Brookfield Financial, said the weak returns shown by the IPD report will not deter development by firms such as his. “Just because development yields are where stabilized cap rates were 10 years ago doesn’t make development any less opportunistic, and fraught with risk and entitlement and development and demand and leasing.

“I think it is still a complicated game, and it is even more complicated now because markets – in particular this one – with the amount of opportunities to intensify and mega projects…that are mixed use and are more complex, it is still extremely risky but one that our industry, and in this marketplace in particular, are very sophisticated. I think it is a great opportunity.”

It is also a great time for real estate operators, said Triovest’s Brown. “This sort of market is actually a great market if you are somebody who loves operating real estate. You roll up your sleeves, you get into the assets and you turn over every stone to maximize the income because that is all you got.”

The real estate trio all concluded that the 5.7% IPD result represents the market bottom, forecasting a 2017 return of between 6% to 6.5%.

The IPD index covers 43 portfolios, 2,429 assets and makes up about 48% of the domestic professionally managed market.

On a total return basis, residential was the best performing asset class, yielding 8%, followed by retail (6), industrial (5.8) and office (4.7).

Vancouver was the best performing market (12% total return) followed by Toronto (8.6). The worst performers were Edmonton (minus 0.6) and Calgary (minus 2.8).