Mainstreet Health Investments Inc. raised $95 million in an initial public offering on the Toronto Stock Exchange early this month that will be used to acquire senior housing and care properties. 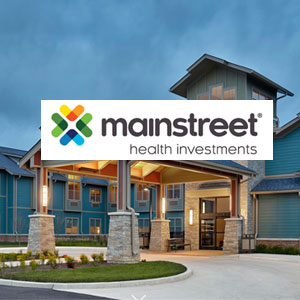 “It really is a demographic opportunity when you think about the aging baby boomer population,” said Mainstreet Health Investments president Scott White.

Mainstreet Health Investments is an affiliate of Mainstreet, a Carmel, Ind.-based company specializing in real estate development, value investments and health care. Mainstreet is the largest developer of transitional care properties in the United States.

Mainstreet Health Investments already owned 11 properties in the Chicago area and the majority of the net proceeds from its sale of 9.5 million common shares will be used to acquire:

Any remaining net proceeds will be used to repay financing on one of the company’s existing properties, lend mezzanine financing, fund capital improvement projects and for working capital.

Model based on HealthLease Properties

White said the triple net lease — an agreement that designates the tenant as being solely responsible for all of the costs related to the asset being leased, in addition to the rent — will be a key factor in Mainstreet Health Investments’ success.

“They pay the real estate taxes, the insurance, the maintenance and the capital expenditures. They pay us the rent, we pay the debt and we distribute or reinvest the rest. We don’t operate or maintain the buildings in any way. They are minimum 15-year triple net leases, with annual rate escalators of approximately 2.2 per cent per annum.”

Mainstreet has relationships with “everyone in the senior housing and care ecosystem,” according to White, which will create deal flow for Mainstreet Health Investments.

Mainstreet Health Investments also has an agreement in place with Mainstreet that stipulates that each development opportunity by the parent company must be shown to an independent six-member board from the affiliate.

Approximately 25 per cent of HealthLease Properties’ portfolio was Canadian, and White said Mainstreet Health Investments is actively looking at opportunities in Canada.

“With the triple net lease structure, location doesn’t really matter as much. We rely on our operators to find the right markets, and it’s important to partner with the right operators.

“We’ve got to find operators that are experienced and have a long track record and are large enough that they’re professionally operated. We tend not to partner with operators that only have one or two facilities.

“We focus on operators that have a strong regional focus. We believe that healthcare is best delivered locally and we’re not sure if partnering with large national brands is the best strategy.”

A reverse takeover of Kingsway Arms Retirement Residences Inc. was used to launch Mainstreet Health Investments. It was announced last November and a release about its closing was issued on April 4.

“We identified an empty shell, as Kingsway Arms had no assets and just a little bit of cash, and the thought was that it might be a more efficient way to go public rather than all the time and expense it takes to go public,” said White.

BMO Capital Markets, CIBC Capital Markets and National Bank Financial were the lead underwriters for Mainstreet Health Investments’ initial public offering. Shares were initially priced at $10 and have been trading very close to that since then.