It’s said that whatever doesn’t kill you makes you stronger. 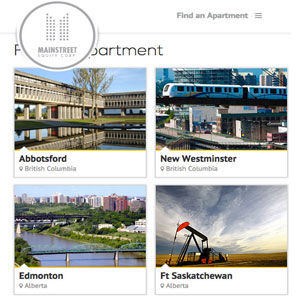 In the case of Western Canada-based apartment owner Mainstreet Equity Corp., (MEQ-T) it has seen its fair share of body blows and has emerged a bit battered but perhaps leaner and better for the experience.

“Everything possible could have gone wrong in Alberta,” said Bob Dhillon, Mainstreet’s president and chief executive.

His lengthy list of wrongs start with oil falling from the $100-a-barrel range to $28, the institution of a carbon tax, higher corporate tax and the NDP’s surprise election victory in his home province of Alberta.

That situation reversed recently with its recent first quarter outpacing the previous quarter in the key markets of Saskatchewan and Alberta.

“That is an early indication of markets stabilizing,” said Dhillon.

To that positive outlook, you can add stronger oil and gas revenues to energy companies and a Trump victory in the U.S. that should spur production and pipelines in North America.

The Calgary-based executive is a big booster of the province’s two big cities. “I have been preaching for a long time that Calgary and Edmonton have become lifestyle cities.

“(They are) the only affordable cities in Canada where you can buy a house for $400,000 or $500,000, commute 15 minutes to work, get your kids in school, it’s safe, and both cities are 1.4 million people,” large enough for self-sufficient economies.

Alberta has also enjoyed an annual influx of about 40,000 newcomers even during the recent years of energy-caused recession.

Dhillon noted the strong fundamentals of the Alberta economy are generating some attention.

“What I find interesting is U.S. investors, institutional and (others) are circling around Alberta,” Dhillon said. “They see the currency at a discount, they see values.

“From their point of view, not mine, North America is fully valued except Alberta and Saskatchewan. They see currency play, they see value play and they see lower interest rates.”

Dhillon bases his assessment on the best possible information: U.S. investors knocking on his door.

“For two years, nobody wants to talk to me and all of a sudden we have people coming in from San Francisco and Chicago. I think they are in the initial stages of investigation and they are also feeling their way around if this is a bottom or not.”

Mainstreet a buyer, not a seller

Mainstreet, which noted some acquisition activity in its most recently quarterly report, looks to further add to its portfolio of Western Canada multi-res.

“We are very excited and very aggressive and in a very strong acquisition mode,” said the Mainstreet CEO. Even with the multi-year downturn in Alberta, property is hard to come by, he noted.

“People are not throwing properties away or discounting their properties and blowing them out.”

Given Mainstreet’s focus is on mid-market, value buildings in the West which are generally smaller buildings purchased below replacement cost that require some capital TLC. This strategy frees the company from a market cycles approach for adding new product to plump its inventory.

“We are dealing with distressed situations and they are not totally due to economic reasons . . . it could be a lot of other reasons.”

In today’s down market, Mainstreet does find fewer bidders than usual for its mid-market prey.

“That gives me a little bit of a competitive advantage.” An “opportunistic” acquirer, Dhillon does not have a formal target for acquisitions this year.

“If the opportunity arises, we have $150 million in liquidity where we can go out there and hit it hard.”

“That is a testament to our business model of buying mid-market, add-value assets,” Dhillon said.

The real estate company has also been buying its own shares, viewing them as significantly discounted to net asset value.