Milborne Group, the largest new condominium broker in Canada, has helped sell more than 100,000 units valued at more than $25 billion in more than 700 developments over the past 40 years. 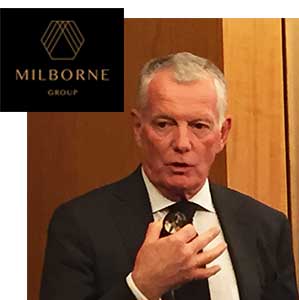 Chief executive officer Hunter Milborne obviously has a good handle of the Canadian condo business, and he just entered a strategic partnership with Pordes Residential to serve Florida, so his views on the Greater Toronto Area (GTA) market carry some weight.

“The statistics are in for last year and we had just under 30,000 new condo unit sales in the city, and we sold just over 5,200, which is just under 20 per cent,” said Milborne. “That was a record year for us both volume-wise and with market share.”

Lack of condo inventory in Toronto

A balanced condo market should have about nine to 12 months worth of units in inventory, and Toronto has approximately 10,000. With the recent sales velocity, that’s just a four-month supply.

“It’s partially because sites are getting harder to find and are harder to get approved and they’re selling faster, so there’s just not as much available,” said Milborne. “And with a lack of inventory, I’ve seen prices move a lot in the last six months.”

Steady price appreciation over the past four years has helped the GTA avoid the condo market crash many pundits had predicted. And even though prices have accelerated upward in recent months, Milborne said he doesn’t “see any danger signals on the horizon” because units continue to sell quickly.

Milborne is involved with several projects in the GTA that are in the early stages of the approval and construction process.

“Probably the most exciting one we’ve got is a big project for Pemberton,” he said.

“Rarely do you get a whole city block. Most sites are mid-block or a corner here and there. This is a site bordered by Front Street, Sherbourne, Esplanade and Princess. It’s four towers with about 450 units per tower. They want to build it all at the same time, which means they need to sell 75 per cent of it this year. That should be coming on the market in mid-March.”

Milborne is marketing Mattamy Homes’ Vita on the Lake and Lago properties on Lake Shore Boulevard West in Etobicoke. The next building will go on sale in April or May, according to Milborne.

“That whole Etobicoke motel strip has been a market that’s doubled in price over the last seven years. It’s had a relentless supply of new buildings coming, and there are three more buildings to come. Then the Etobicoke waterfront will be built out.”

Controversy with The Dale

Milborne is involved with the contentious The Dale development at 5 Dale Ave. in Toronto’s ritzy Rosedale neighbourhood. Platinum Vista Inc. has proposed a boutique, ultra-luxury, four-storey, 26-unit condo overlooking the Rosedale Valley Ravine on the site of three single-family homes, but neighbours have pushed back.

If it doesn’t get approved at the city level it will go before the Ontario Municipal Board (OMB), where Milborne expects it will be approved.

“It’s not that the OMB is favourable to developers, but developers prepare better and spend more and come up with a better case. The reasons why people object, such as they don’t want to have their view changed, aren’t really planning issues.”

Milborne didn’t clarify the type of view change objection he was referring to. They can vary widely depending on the circumstances.