Minto Group is taking a few pointers from Ottawa’s downtown condo market as it makes extensive renovations at two of its Centretown rental buildings, the eight- and nine-storey The James and The Gilmour properties. 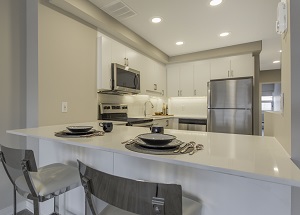 Minto Group is redesigning the interiors of its rentals at The James and The Gilmour in Centretown, as part of extensive renovations to both buildings. (Image courtesy Minto)

“It’s a very vibrant neighbourhood which, over the last 10 or 15 years, has been a natural site for intensification with condos. I think there’s an influx of people that want to live a more urban lifestyle and this is one of the neighbourhoods that is getting targeted for that,” said Ben Mullen, vice president of asset management at Minto Properties.

Minto recently began renovations at both The James and The Gilmour, which are home to a total of 146 one-bedroom units. The renovations, expected to cost up to $8 million, include work on interior units, amenity spaces and common areas. The changes are the latest example of Minto’s focus on expanding its services to accommodate new trends and the shifting needs of downtown residents.

“Since the Liberal government came in, rents and condos have been stronger. As condos came into the Centretown area with brand new product, there hadn’t been new purpose-built rentals in 20-30 years. (Their success) demonstrated that there is demand for a higher-end, nice product,” said Mullen.

The square footage of the one-bedroom apartments will not be changed as part of the renovations. Available units will still range from 458 to 598 square feet, but will benefit from a redesign to accommodate new features and more efficient use of the space.

Units are also available for pre-leasing, with some finding occupants before the work is finished. When the first batch of nine apartments were made available for pre-lease in April, they were marketed for between $1,449 and $1,469. As demand for the product has gone up, that range has increased to $1,549 to $1,569.

Unlike their condo competitors, where similar-sized units cost an average of $1,800 per month in Ottawa, the apartment buildings had no common areas other than the lobbies. To give residents amenity space outside of their one-bedroom units, excess laundry space in The Gilmour and unnecessary office space in The James are being converted into lounges and party rooms.

Ottawa-based Hay Design has been brought in to help improve the existing interior spaces such as corridors and the lobbies. Improvements to the building exteriors and landscaping are also underway.

Along with new and improved common spaces, the renovations also include a shift to in-suite laundry, fully renovated kitchens, and new windows.

Occupancy on newly renovated units began in April. Minto plans to continue renovations on a unit-by-unit basis in synch with natural tenant turnover.

“There is no effort on our part to move tenants,” said Mullen. “In a typical year in Ottawa, a building will turn 20-25 per cent of its units. At James/Gilmour, we have a turnover rate of 27 per cent.”

Since interior work is tied to the natural turnover rate, the renovations are expected to take about three to four years to complete. Minto hopes to upgrade 40 to 50 units within the first year. Twenty-five units have been completed four months into renovations, putting Minto a bit ahead of pace for the time being.

“We can take our time and renovate units without disrupting tenants, but we certainly encourage tenants who want to transfer to renovated units,” Mullen said.

Minto can afford to be patient with The James and The Gilmour. Mullen said it considers these building long-term revenue-producers; it’s not looking for a rapid escalation in returns.

These buildings have always been traditional apartments, not focused on any specific subsets of renters such as students, seniors, or working-class residents. They benefit from being located in close proximity to the Byward Market as well as the Glebe and the Rideau Canal.

The repositioning does result in higher rents for the upgraded units, but Mullen said the buildings are still positioned to be more affordable than comparable condos.

Mullen said the timing for repositioning is perfect. The economy in Ottawa has strengthened and the city’s condo market is saturated with recent builds, opening the doors for rental landlords with good product.

Although Minto doesn’t have any similar projects ongoing in Ottawa, it is the latest in several repositioning/renovation projects the company has undertaken.

one80five, at 185 Lyon, also in the downtown, is an example. Minto converted the former Minto Suites hotel into a rental property, another higher-end offering aimed at people who work in the downtown area.

It is also examining assets in Nepean with an eye to renovations which target more suburban-minded groups, to fill any gaps in that market.

“The Ottawa market is really tight in terms of vacancy and rent growth. It’s giving landlords an opportunity to improve the product and provide a return that makes sense,” Mullen said. “It’s a great environment where you can meet the objectives of owners while improving the communities.

“That’s the perfect storm we’ve got going on in Ottawa right now.”