Innovative Upbrella to be used in Montreal hotel project

When the Hôtel Le Germain Montreal begins work to add six new floors atop its 17-storey downtown hotel, the construction system used for the building expansion will likely turn heads. 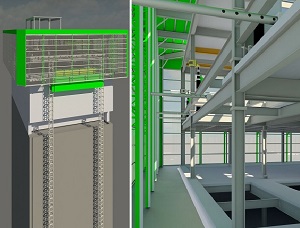 Renderings show the interior and exterior of a building being constructed with Upbrella’s system. (Courtesy Upbrella)

Instead of a traditional crane, the additional storeys for the President Kennedy Avenue hotel will be built with the use of the innovative crane-less construction technology devised by Upbrella Construction – a protective enclosure with a peripheral work platform which uses elevator-style lifting actuators to construct one floor at a time.

Unlike traditional open-sky construction, the enclosure enables structural and cladding work to be completed while sheltered from the whims of weather – an important benefit in building during a Canadian winter.

Upbrella acts as “cocoon” for workers

“It’s difficult to work properly when it’s cold or snowing,” says Jacques Gauthier, vice-president, business development of Brossard, Que.-based Upbrella Construction. Productivity and quality fall when construction workers work outside in cold, windy and snowy conditions and “the risk of accidents is enormous.”

With Upbrella, construction workers who are sheltered from the elements can heat, ventilate and control humidity while working, he says. “We’re compared to a cocoon in construction.”

Gauthier adds the Upbrella technology is the solution of choice for high-rise construction in dense urban cores and for developers looking to exploit air rights.

Joey Larouche, an engineer who is president of Upbrella Construction, developed the building system with his cousin Justin Larouche and father Gilles Larouche. The privately financed firm is a unit of 3L Innogenie.

Upbrella can be used for new and existing buildings and has been patented in 15 countries. Utilizing the construction technology, a building’s roof is installed at the start of construction, and successive floors are then built and lifted into place.

Other projects jumping on board

The technology came to public light in 2014 when it was used to build Rubic, a 12-storey building with 47 rental apartments on René Lévesque Boulevard East in Montreal.

It will be used on the upcoming Villa Nova condo development in the Montreal borough of Lachine and in several other projects in the city which will soon be announced, Gauthier says.

In Toronto, Upbrella is in discussion to have its technology used for a condo project on King Street, in which 15 additional storeys will be built over an existing four-storey heritage building. The cost to use cranes at the site would be enormous, he says, and there would be disruption to the tram line on the street. “We can work in very tight urban spaces.”

The technology will also likely be used for an infill project to build rental apartments on Yonge St.

“Piercing the Toronto market will give us a major North American boost,” says Gauthier, noting if you can succeed in Toronto, you can do so anywhere.

Gauthier says it takes time to convince builders to change their tried-and-true construction techniques: “Their order books are full; they’re making money. They say, ‘It’s not time for me to change my recipe.’

“It takes open-minded clients. I meet lots of people who say it’s too fast, too much. That’s the challenge. We’re disrupting how business is done.”

Last year, Upbrella won PWC Canada’s 2017 Vision to Reality Innovator of the Year Award in the under-$25 million Disruptors category. As PWC noted: “Upbrella high-rise construction starts with the roof and doesn’t need a tower crane. The workers, the building and the neighbours are fully protected all the time, allowing the finish and delivery of the first floors much faster.”

Aside from limiting the disruptive impacts construction can have on an area, Gauthier says a 15-storey building can be completed 25 to 30 per cent faster than with traditional technology.

He maintains the technology is also safer for workers — and Aon Group agrees.

The global insurance company chose the technology as a way to mitigate risk and is issuing risk insurance policies that reduce premiums by 30 to 35 per cent.  That’s of particular benefit in the U.S. where insurance can represent up to three per cent of overall construction costs, on average, and substantially more in markets like New York City.

As a way to continue to get attention, Upbrella plans to install a 20×18 video screen at Hôtel Le Germain Montreal to advertise the project, instead of using large billboards. Gauthier says that idea has gone over well with potential clients in Toronto who said “Wow, I can advertise my project. I’ll be on the news all the time.”

Upbrella plans to license or franchise the technology and soon expects to announce its first licensee in Eastern Europe.

“The idea is that in 10 years there’ll be 50 Upbrellas around the world,” Gauthier says. “We hope Upbrella will become a household name pretty quickly in the coming years.”