Carbonleo’s massive Royalmount mixed-use mega-project, which it plans to build at the busy intersection of Highways 15 and 40 in the heart of Montreal, will include 3.6 million square feet of commercial space. 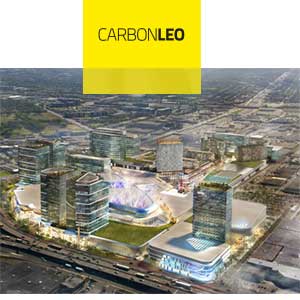 To be built on an 85-acre site, the project will feature nearly 200 stores, 1.5 million square feet of office space, five hotels, a public square and a number of entertainment choices. It will attract an estimated 30 million visitors a year.

The project “will allow for the redevelopment of an area that is an industrial wasteland,” in the heart of the island of Montreal, says Claude Marcotte, executive vice-president, development and construction at Carbonleo.

Marcotte was speaking at the Quebec Apartment Investment Conference in Montreal on Tuesday.

Will include $20-million pedestrian overpass

Quebec’s transport ministry, the city of Montreal and Town of Mount Royal have just given their approval to Carbonleo to build a $20-million pedestrian overpass over the Décarie Expressway (Highway 15) that will link Royalmount to the De la Savane Metro station, Marcotte says.

“The presence of the Metro is one of the most important elements of the project,” says Marcotte, noting it will be used by 10 to 12 million visitors a year to access Royalmount. Costs for the overpass will be fully borne by Carbonleo.

The overall project has not yet received approval from the City of Montreal but has been supported by the neighbouring Town of Mount Royal where most of the land is situated.

Royalmount was denounced by Montreal’s governing Projet Montréal party when it was in opposition. The party, which won last November’s municipal election, previously compared the project to the Quartier Dix30 entertainment district on the South Shore of Montreal (which was developed by several of the executives behind Carbonleo). It contended the project would harm retail nearby and add even more traffic to one of the most congested areas of the city.

Marcotte says Carbonleo met with the City of Montreal’s executive committee last week and the city is now analyzing the project. “I think it should go well,” he says of talks with the city.

May include residential component

Carbonleo consulted with Cirque du Soleil, Peter Simons of the Simons department store chain and renowned chef Normand Laprise of Toqué restaurant, among others to determine the “special recipe” that will make the project a go-to destination for future generations.

The entertainment component will include two concert halls with room for 7,000 attendees which will be managed by concert promoter Evenko, an aquarium, water park and movie theatres. In addition, a public market will showcase local produce and events throughout the year in the public square.

Royalmount will have several “first-to-market” elements with banners not yet in the Quebec or Canada markets.

There will be 12 entry and exit points to Royalmount and a smart parking system, as well as a shuttle to Pierre Elliot Trudeau International Airport and the new REM light train. About 4,000 people will work daily at the site.

Marcotte says Carbonleo has discussed hotel needs with Aéroports de Montréal, which operates Trudeau Airport. Passenger traffic at Trudeau has been growing and the airport is a 10-minute drive from Royalmount.

Carbonleo will team up with equity partners to obtain between $500 and $750 million in financing for the project, Marcotte says. Without providing further details, he named major players like Cadillac Fairview, Oxford and Ivanhoé Cambridge as possible partners.

Marcotte says Carbonleo examined market trends and toured projects in Dubai, England and the U.S. in planning the project, which the company hopes will become the No. 1 commercial and tourist destination in Montreal.

Carbonleo, which has 50 employees, was formed in 2012 by former Devimco partners who developed the Quartier Dix30. The company is also developing the $500-million Four Seasons Montreal in downtown Montreal, next to the Ogilvy department store on de la Montagne and Ste. Catherine Streets.

Located on the site of the former Hôtel de la Montagne, the 18-storey building will have 166 hotel rooms and 18 luxury condos and is slated to open in March 2019, with a soft opening this Christmas.

“It will be one of the most beautiful Four Seasons in the world,” Marcotte says, adding half of the condos have been sold “at a completely ridiculous price” of $1,700 to $1,800 per square foot.