The Niagara Parks Commission has issued a request for proposals to develop its Niagara Parks Marina property at Miller’s Creek, located 22 kilometres south of the Horseshoe Falls in Fort Erie, Ont. 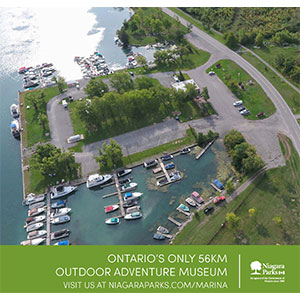 “It also includes and envisions the development of an adjacent parcel of Niagara Parks land which is accessible by both the Niagara Parkway and local municipal roads.

“The existing Niagara Parks Marina site has 135 slips, a small marina building with café and restrooms, gasoline pumps and septic pump-out. Also available is a vacant four-hectare parcel of land, 600 metres to the north of the marina site, which developers could include in their proposals.”

The site hosted shipbuilding and repair facilities, as well as a metal foundry and fabrication factory, from 1903 to 1930. The marina lands were purchased by the Niagara Parks Commission in 1957 and a small boat launch was established in 1965.

The current marina was developed in 1968 and allowed for 54 boat slips when it first opened. An additional 50 slips were added in 1975 and the marina has since grown to include 135 slips.

The site will give boaters access to hundreds of kilometres of lakes, rivers and canals in Canada and the United States. It’s also hoped the winning proposal will optimize the property’s potential for tourism, recreation and historical interpretation and benefit both seasonal visitors and area residents.

“Beginning in 2014, the commission undertook several studies to better understand the waterfront development opportunity at the marina site and recently concluded through market research that the site and accompanying lands could support growth and visitation from the transient boating community in both Canada and the United States,” said Adames.

“The Niagara Parks Marina is the only Canadian boating destination on the upper Niagara River and is uniquely situated to take advantage of that market. Niagara Parks sees that the time is right to maximize the potential of this site and the experiences it can offer.”

While the site is designated for a marina, and that will define any development and help drive ancillary uses, Adames said the Niagara Parks Commission doesn’t want to limit its potential and is open to ideas.

Submissions will be accepted here until June 30. The Niagara Parks Commission — which is an operational enterprise agency of the Ontario Ministry of Tourism, Culture and Sport — is looking for a proposal that will demonstrate innovation, ecological sustainability, excellence in design and strong fiscal responsibility.

“Niagara Parks envisions a world-class waterfront development that appeals to vacationers and boaters looking for an exceptional stay in a truly unique historic setting,” said Adames.

“As such, we are looking to the investment and development community who have experience in creating world-class waterfront developments and who will work with us under a design, build and operate model on this development project.”

Site will have long-term lease

The development will be advanced under a performance-based long-term lease. It will be based on sustainable financial returns for both the Niagara Parks Commission and the developer and will take capital investment for construction and long-term management of the marina and any associated development into consideration.

Adames said the lease terms in the proposals should be projected to a term of 30 years for evaluation purposes. While developers can propose shorter or longer options, lease terms can’t exceed 99 years.

The Niagara Parks Commission, which was founded in 1885 to protect the natural and cultural heritage along the Niagara River for the enjoyment of visitors while maintaining financial self-sufficiency, has already held two public workshops to gather input on the project.

“Niagara Parks has been involved in discussions with both municipal and provincial government officials to establish a well-defined road map to assist with approvals,” said Adames.

“We are looking forward to advancing this project and envision presenting new plans to the public this coming fall once a proponent has been selected.”