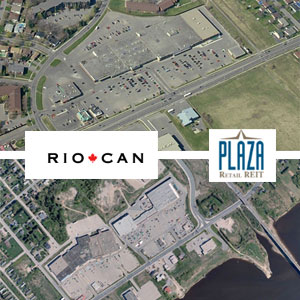 “We were introduced by a common party with the idea that we had a capacity in smaller regional markets to turn around these types of assets, and RioCan had some of these assets and their focus is on larger markets and larger deals.”

RioCan sold its share of these properties for an aggregate price of $11.5 million, free and clear of financing:

– the 176,978-square-foot East Court Mall in Cornwall, Ont., where the major tenants are Dollarama, The Beer Store and Fabricland (top in image);

– the 158,793-square-foot Timiskaming Square in New Liskeard, Ont. where the major tenants are Food Basics, Easyhome and Staples;

– and the 158,454-square-foot Northumberland Square in Miramichi, N.B., where the major tenants are Winners and Giant Tiger (bottom in image).

Zakuta believes it was a fair price and that the additions fit in well with the REIT’s profile. He wouldn’t reveal the redevelopment costs or specific details on how the properties would be revamped.

“The market has really changed in smaller enclosed mall retailing, and we try to play on each property’s strengths,” said Zakuta.

“You’re moving the enclosed mall portion and creating a district shopping centre. We’ve done a lot of that over the years.”

RioCan wanted partner to take over

RioCan chief executive officer Ed Sonshine said the deal was made because Canada’s biggest retail landlord and largest real estate investment trust already has a lot on its plate.

“With the number of projects that we’ve got going forward as part of our overall strategy, it just made sense to us to bring in a partner to take over on these smaller secondary market properties. That’s what it came down to and we ended up going with Plaza because they’re really good at it.

“We’ve got a lot of stuff on the go in terms of redevelopment of assets,” said Zakuta.

“We’re a good ways along in Kenora, Ontario, where we bought a very much challenged enclosed mall last year. We finally launched our redevelopment in Midland, Ontario, which is under construction. We’re developing in different markets across our geography, including Quebec and Atlantic Canada.”

Zakuta is adamant that the REIT has identified several value-add opportunities and has its hands so full with a pipeline of deals in eastern Canada that it isn’t particularly interested in expanding west beyond its two properties in Alberta and one in Manitoba.

However, he’s hopeful that this latest joint venture, which includes Plaza taking over management of the three properties, will make other players in the market take notice and pick up the phone about more redevelopment projects.

“They may have some assets that they’re not prepared to make the effort that’s required and would either sell them to us or do a joint venture as well. There may be an opportunity for others to say, ‘If RioCan can do it, maybe we can.’”