Pros and cons of the Airbnb experience

There are a number of pros and cons when it comes to an Airbnb experience. Having just used one in Toronto this month, here’s my personal experience. 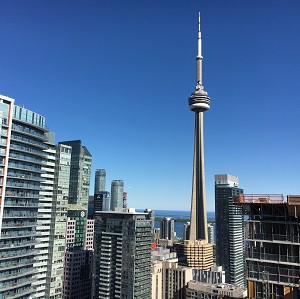 View of Toronto from an Airbnb apartment. (Kelly Macsymic image)

Would I recommend it? Sure, I like a deal and I’m willing to try something a little riskier than cookie-cutter hotels.

But be prepared: there are a few trade-offs.

The logical benefit to using Airbnb is that the properties offered are significantly cheaper than a hotel in major municipalities.

In downtown Toronto, a quick survey of Hotels.com shows today’s rates for a downtown room range from $215 to $436 for the night. Taxes and resort fees are extra.

Alternatively, I paid $130 per night for a one-bedroom apartment between Chinatown and the Entertainment District. There is a cleaning fee, but no taxes so compared to a regular room these added expenses are comparable.

We had plenty of room to spread out and even had a balcony with a view of CN Tower.

The apartment building was situated next door to an urban grocer on one side and a Starbucks on the other. Transit stopped at our front door.

We had no trouble gaining access into the building initially and we were provided keys to the apartment 24/7 during our stay.

Were we fooling anyone? Hard to say, but we sure felt like big-city girls, my mother and I.

The apartment was indeed fundamentally as advertised: one bedroom, kitchen, bathroom, etc. The photos online were not recent, however.

The nicely outfitted white décor could definitely have used a spruce-up. Hotels are guilty of this as well, but I feel it was even more noticeable in this instance.

I made sure to do my research and choose a location with a multitude of good reviews. None of them mentioned the walls, but some did mention another item the owner had not yet remedied: drapes.

In my review of options, I ignored this forewarning as the complaint review was issued at least six months ago and no reviewer had mentioned it since.

There were no window coverings in the living room, where I slept; and not-quite-adequate drapes in the bedroom, either. The only upgrade was that sleep eye masks were left for visitors.

Our apartment was nicknamed The View. Unfortunately, that view is now being partly cut off by an ongoing new development across the street. Time for a name change!

Despite these minor inconveniences, the benefits definitely outweighed the cons on this trip for me and I’d certainly try it again.

Airbnb is not a new presence on the hospitality scene. It was founded eight years ago and now has 150 million users worldwide.

Within an already competitive hospitality industry, it has grown into a force to be reckoned with and the major hotel flags are taking notice.

To keep attracting guests, hotel management are going to have to work toward creating something Airbnb can’t provide.

Affordability mixed with comfort are the mainstays in any hospitality market, but can hotels evolve affordably against the grassroots Airbnb?