Q Management LP (QMLP) has entered into agreements to acquire 2,019 suites at 24 properties in Hamilton and London, Ont., giving it the critical mass it desires in both cities. 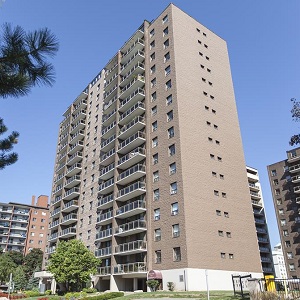 The Villa Marie III in Hamilton is one of a portfolio of residential buildings purchased from Homestead Land Holdings by Q Management LP. (Image courtesy QMLP)

“Our strategy is to buy very well-located assets in markets that are growing and strengthening, and to enhance the assets by spending targeted capital expenditures,” said QMLP president and chief executive officer Dan Argiros.

The real estate asset and property management firm purchased 11 buildings with 1,036 suites in downtown Hamilton from Skyline Apartment REIT for $173 million. Over the next five years, it plans to spend $17 million in capital enhancements on the portfolio, which is comprised of concrete high-rise buildings constructed in the 1960s and ’70s.

“There aren’t any major fixer-uppers,” said Lorne Stephenson, the senior vice-president of Conundrum Capital Corporation, which owns 51 per cent of QMLP. “This is just an ongoing program to sustain the cash flow.”

QMLP is also under contract to purchase four closely located properties with 425 suites in Hamilton and 558 suites in nine properties near Western University in London from Homestead Land Holdings Ltd. for total consideration of $129.7 million. The London transaction is scheduled to close in late September and the Hamilton deal will be finalized in mid-October.

QMLP has budgeted $14 million for capital expenditure enhancements over five years for these two portfolios, which are comprised of similar types of buildings as those acquired from Skyline.

All of the acquisitions will feature on-site property management by QMLP subsidiary Q Residential.

QMLP has previously done transactions with both Skyline and Homestead and enjoys a solid relationship with both of them.

Appeal of Hamilton and London portfolios

QMLP is a Toronto-based rental apartment firm, which now owns and manages 9,500 suites in 69 buildings in Ontario, with the majority located in the Greater Toronto Area, Ottawa, Hamilton and London.

“We saw the Hamilton opportunity as a chance to obtain critical mass in a new market that we want to get into,” said Argiros. “It’s a market that’s growing with a strengthening local economy, and it’s an alternative to the GTA.”

Argiros said London has about 44,000 apartment units. Acquiring the Homestead portfolio gives QMLP a good toehold for entering the market.

“London’s just too far away to be top-of-mind for a lot of folks. It’s a bit of an isolated area that runs on its own steam and its own timelines. It just keeps chugging along.”

Argiros said QMLP now has about $2 billion in assets and has enough capital to buy another 4,000 or 5,000 units. It’s interested in expanding its portfolios in the cities it’s already in, as well as investing in other Canadian cities. Five hundred units is the minimum amount QMLP would consider acquiring to move into a new market, although it would prefer 1,000.

“We’ve been looking around and haven’t found anything that’s given us a risk-reward return ratio like Hamilton and London have,” said Argiros. “We’ll strategically go where opportunities present themselves. If something comes up next month, we’ll look at it. If nothing comes for six months, that’s OK, too.”

“We just can’t go and buy one building in a new market,” added Stephenson. “That just kills our management approach. We’re really looking for something that gives us a critical mass to be able to withstand the management costs.”

Manulife Asset Management Private Markets acquired a 49 per cent stake in QMLP for an undisclosed price from Conundrum last summer. Manulife had been an early and major investor and Argiros said that long-term working relationship has strengthened over the past 15 months.

“The relationship with Manulife really opens up a lot of new doors, both for transactions and for capital. So on top of our own momentum, investor base and critical mass going forward, we’ve now added on the Manulife opportunities and relationship, which brings a whole new spectrum of opportunities and markets for us.”