This summer’s opening of Wendy’s and Subway/Yogen Fruz fast food restaurants will be the latest steps in the dramatic revitalization of Toronto’s Regent Park neighbourhood. 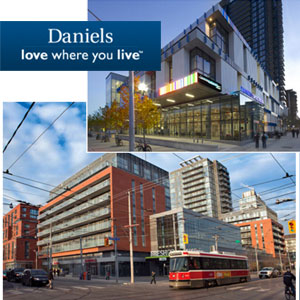 “The new Regent Park is blending back into Toronto from where it was before,” said Martin Blake, vice-president of The Daniels Corporation, which is partnering with Toronto Community Housing Corporation to transform the 69-acre site in the eastern part of downtown Toronto.

“Originally it was 100 per cent social housing, and there weren’t many areas in Toronto that were like that. The majority of Toronto had social housing in it, but it was a mix. That’s exactly what’s happening in Regent Park now. That mix of social housing and market housing is being introduced here.

“And with it comes opportunities and a desire for stores and businesses to be able to relocate and take advantage of this large population in a very small area of Toronto. We anticipate that by the time we finish, we’ll probably have about 17,500 people living in this area.”

Regent Park launched in the 1940s

Regent Park was a public housing project that began in the 1940s. Less than 60 years later, many of its buildings were in disrepair and the area suffered from a high crime rate and unsavoury reputation. Something had to be done to halt the decline, and redevelopment began in 2006.

The plan included the replacement of the 2,083 existing social housing units with new energy-efficient units and the introduction of approximately 3,000 market suites for sale in an area bordered by River Street to the east, Queen Street East to the south, Parliament Street to the west and Gerrard Street to the north.

Response to these changes has far exceeded Blake’s expectations. He’s pleased there are virtually no available market housing units and that large numbers of seniors and single women have been moving into the OneCole, OnePark West, PaintBox and One Park Place North Tower condominiums.

The under-construction and sold-out One Park Place South Tower, The Bartholomew and The Wyatt condos will follow.

“One of the things we’ve been doing is starting construction first before projects go on sale,” said Blake.

“We like to be able to say that this is not a hope that something’s going to happen. We want to be able to show you exactly what’s going on with your building when you buy it.”

“What we originally thought was going to be strictly residential has now become retail, commercial and office space,” said Blake. “We weren’t expecting it, but it’s been a real pleasure for everyone involved in the organization and revitalization to see this expansion.”

About 500 jobs have been created for local residents and Blake said potential retail and commercial tenants are asked about their intentions to employ people from Regent Park as part of the decision process on who to lease to. He cites RBC and FreshCo for having particularly impressive commitments to the community.

Connecting people to where they live

The George Brown College Fashion Exchange, where immigrants and at-risk youth can receive specialized training to prepare them for entry-level positions in the fashion industry, has just opened in Regent Park. PaintBox Bistro has also partnered with George Brown College to enable residents who work at the restaurant to move on to the college’s culinary school and for students to work at the restaurant.

“It connects people to where they’re living and they’re able to get an education,” said Blake. “It warms your heart when you see all of these pieces coming together and creating opportunities for people.”

The Daniels commercial leasing team is seeking tenants to occupy approximately 2,700 square feet of Dundas Street East storefront and 2,000 square feet of Regent Park Boulevard storefront. Daniels is also working with community residents on a number of initiatives and business plans the developer hopes will enable them to set up their own shops within Regent Park.

“We don’t rush to fill all of the spaces because occasionally you have some of these longer term projects that may take a year or two to get there,” said Blake.

Regent Park is now also home to an aquatic centre and a 60,000-square-foot community centre interconnected with Nelson Mandela Park Public School. The Toronto Catholic District School Board has also acquired a parcel of land in Regent Park on which to build a school.

Maple Leaf Sports & Entertainment is funding 2.8 acres of athletic grounds that will include a refurbished ice rink, a soccer/cricket pitch, a new basketball court, a running track and new children’s play areas this summer.