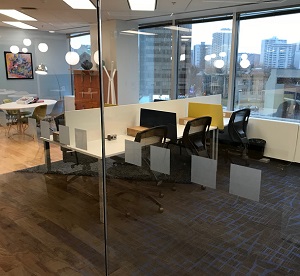 Co-working giant Regus is the latest to open a shared work space in Hamilton, in a downtown high-rise at 21 King St. West. (Image courtesy Regus)

“We’ve actually been looking in Hamilton for the last three years,” said Wayne Berger, executive vice-president of Regus Canada, which just opened its first location in the city.

“It’s taken us that amount of time to find the right location at the right deal terms and in the right neighbourhood and sub-market in Hamilton to start building the Regus and IWG brands.”

The Hamilton centre in a 16-storey, class-A building at 21 King St. W. is the company’s 104th location in Canada. It’s situated beside the Jackson Square shopping centre and within easy walking distance of a post office, banks, coffee shops, restaurants, bars, cultural and entertainment venues.

The 13,000-square-foot space occupies the entire fifth floor of the building and offers private and shared offices, a large collaborative co-working space and multiple team meeting rooms. Underground parking is available and ample surface parking is nearby.

While Berger won’t reveal potential locations or timelines, he said Regus will open multiple locations in Hamilton and expects one of them to be under the Spaces brand.

“Considering the demand, I think the market is still under-serviced,” said Berger. “It’s a market that will benefit from additional solution providers.”

Hamilton is drawing interest from co-working space providers due to a burgeoning entrepreneurial community, a growing population of people moving from Toronto to escape its high real estate prices, and available office space.

While vacancy rates have been dropping in Hamilton’s downtown core in recent years, it still had 500,000 square feet of space available last fall, according to QuadReal Property Group market analyst Shawn Gilligan, who has studied the city’s co-working market.

“It is becoming more competitive, but there’s still a lot of office space available,” said Gilligan.

“Hamilton is slowly, slowly chipping away. There are some nice brick-and-beam buildings downtown being redeveloped. More companies are relocating in downtown Hamilton.”

Hamilton’s existing co-working spaces are generally clustered in its downtown core, or on its fringe, which is the norm for most cities.

Denver-based Intelligent Office, which has co-working facilities in 21 American states and three provinces north of the border, has a Hamilton centre at 1 Hunter St. E. Eleven of the company’s 13 Canadian locations are in Ontario, almost exclusively in the Greater Golden Horseshoe Area.

Smaller operators including CoMotion (which has locations at 115 King St. E. and 302 Cumberland Ave.) and one-off providers The Populace at 180 James St. S., The Seedworks at 126 Catharine St. N. and Steel City Studio at 327 King St. E. also have a presence in the market.

“Some are in very nice buildings right in the centre of Hamilton, so there are amenities around them in terms of coffee shops, restaurants and stuff like that,” said Gilligan. “They share those amenities with the broader office market.”

While Gilligan believes there’s a ceiling for co-working spaces in Hamilton, he thinks it still has room for more growth.

Members at Hamilton’s new Regus location also have access to a global network of more than 3,000 flexible workspace locations, which Gilligan said has the potential to make it more attractive to some users.

“I think it will perform well,” said Gilligan. “Regus always performs relatively well in the markets that it goes to.”

Hamilton is generally home to smaller firms which fit co-working spaces’ target market. Such facilities also provide a good starting point for companies looking to open a satellite office or move into the city.

“We’re seeing a collection of both large and small companies, as well as some companies that are based in other cities that have workforces in Hamilton to help support some localized workspace needs,” Berger said.