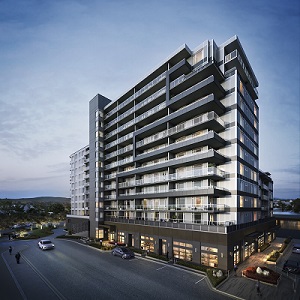 The mixed-use development joint venture, named Brio, will include a stepped six-, 10- and 12-storey high-rise with about 130,000 square feet of rental housing to be managed by Boardwalk and 10,000 square feet of retail to be managed by RioCan. The estimated total cost of construction is $75 million to $80 million, shared equally by the two REITs, and the project is anticipated to be completed in 2020.

Sam Kolias, chairman and chief executive officer of Boardwalk REIT, said the site is located in a very desirable location adjacent to the city’s light rail transit line and close to the University of Calgary, Foothills Hospital and McMahon Stadium.

“It’s a very exciting development in an amazing community,” said Kolias. “We worked really hard with the existing community and have been very sensitive to the needs of the existing Brentwood community, where we’ve all together come up with larger unit sizes providing a bigger choice to a bigger population group in Brentwood.

“The stepping was really important to the community and to our design. It’s a really beautiful design that really fits in well to the existing community.”

Back in 2017, RioCan announced its plan to turn dozens of its retail properties into mixed-use developments, then created the RioCan Living brand in early 2018 to carry out that ongoing strategy.

When asked if Boardwalk has additional development plans with RioCan, Kolias said: “We are always looking for how to enhance our existing relationships and continue building better communities together. We do not have any other firm plans with RioCan at the moment.”

“We’ve developed and are developing just over 1,000 units now over the last few years and we’ve got opportunities in our existing lands in the west and the east to build another 6,000 units,” said Kolias. “We’re really excited about that. This is all about our long-term strategy to reduce the average age of our community and to build new communities to lower our average age.

“We’re slowly but surely building new, because we believe it’s important to reduce the average age of our communities and build new communities on a balanced, measured basis.”

Last year was a transitional year for the REIT as more than 3,000 suites were upgraded. The company plans to continue renovating 1,000 to 2,000 suites per year.

Recently, the REIT announced its second-quarter results for the period ending June 30 and described them as “solid.”

The key highlights of the results were:

“The positive revenue trend that began approximately nine months ago from improved occupancy and higher rents as a result of our front-loaded investment in suite and common area renovations continue to have a positive compounding effect and has resulted in significant growth this quarter,” Kolias said in a statement when the results were released.

“That’s one of the biggest things we’re working on is changing our culture to a culture of change,” he said.

In its recent financial results, Boardwalk said its long-term strategic goal is to have a portfolio split approximately 50 per cent in the high growth markets of Alberta and Saskatchewan and 50 per cent in other high growth and undersupplied markets including, but not limited to, the Greater Toronto Area, Vancouver, Ottawa, Montreal, Quebec City, Winnipeg, and Halifax.

“To accomplish this, the trust intends to strategically partner, acquire and/or develop 10,000 to 15,000 apartment units in high growth, undersupplied markets, while also divesting some of its current non-core assets.

“The trust’s portfolio growth will primarily focus on opportunistic value creation opportunities in major markets over the next 10 to 15 years,” it said.