The Seasons mixed-use development is expected to receive a major boost from Outlet Collection Winnipeg‘s May 3 opening.

Seasons is set on a 117-acre property in the southwest part of Winnipeg that was purchased by Regina-based Forster Projects and Harvard Developments Inc. four years ago. 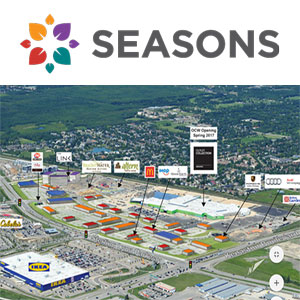 Outlet Collection Winnipeg, co-owned by the two developers and Ivanhoé Cambridge, will be Central Canada’s only dedicated outlet shopping centre.

“The site (of the outlet mall) is immediately across the street from a project called Seasons of Tuxedo, which houses IKEA,” said Forster president Blair Forster. “Having IKEA there was a large catalyst for us being here because it’s a significant draw.”

Forster and Harvard have been selling off lots in Seasons and many building owners are expecting to be open for business this summer or sooner.

Regina-based Deveraux Developments acquired eight acres for The Summit at Seasons, most of which has been erected. It’s comprised of six buildings and includes six-storey steel and concrete and four-storey wood-frame construction.

When completed, the residential development will have 416 rental units of various sizes and a clubhouse with an outdoor swimming pool, fitness centre, barbecue/fire pit area and games lounge. There will also be underground parking.

Winnipeg’s A&S Homes purchased five acres for The Link, which will feature four 10-storey concrete life lease retirement residences that will break ground in the spring. Suites will range in size from 900 to 1,610 square feet.

The Link will include: an indoor parkade with storage lockers; a waterscape; a rooftop terrace with bocce courts, putting green, barbecue bar, trellised sitting areas, games room and a golf simulator; a large multi-purpose room with a kitchen; a common room with a fireplace; a guest suite; a wine-making room; a woodworking shop; a car wash; a fully equipped gym; an exercise area; a spa; a salon; a sauna; showers; a music room; a theatre; and a connecting bridge between the buildings to provide a complete indoor walking circuit.

More retail to come at Seasons

That leaves Forster and Harvard with about 50 acres that will be dedicated to 400,000 square feet of retail space that’s in the process of being developed.

The first two tenants, Dairy Queen and Pizzeria Pronto, have opened. A building that will include International House of Pancakes and Good Earth Coffeehouse is under construction. McDonald’s will break ground this spring.

“Restaurant tenants have been the early adopters of the project, but we have another 100,000 square feet of tenants that are in the final stage of negotiations,” said Forster, adding they’ll likely include more restaurants, a grocery store, a drugstore, a couple of junior box stores and service sector companies.

“We’re hoping that we’ll have at least another 25,000 square feet under construction before summer and the vast majority of the additional 75,000 square feet will probably break ground in the spring of 2018. The full build-out will be about 800,000 square feet of retail.”