Starlight Investments, which has been busy acquiring multi-residential properties of late, switched things up last week with the purchase of a 50 per cent interest in the Mississauga Executive Centre. 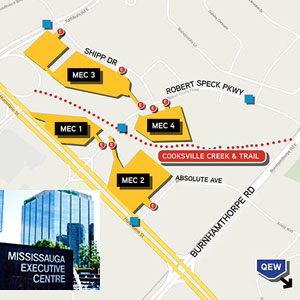 The 1.15-million-square foot commercial facility is sited on 26 acres at the intersection of Hurontario Street and Burnhamthorpe Road East and is adjacent to the Square One Shopping Centre.

For Starlight, which bought the stake in MEC from an institutional investor for an undisclosed price, the deal was simply too good to pass up.

“It’s a premier office complex in Toronto, it is very-well known, it is very prominent, it is high-quality. Any time you have an opportunity to invest in a high-quality trophy kind of asset in Toronto we would like to look at it,” said Daniel Drimmer, Starlight’s president and chief executive officer.

“We like this asset a lot. It is exactly what we buy, the multiple towers, the multiple flexibility of moving tenants and love the location . . . all of the transit and the light rail that is coming.”

Construction of the Hurontario-Main Light Rail Transit line is set to begin in 2018 with completion in 2022. It will run adjacent to the MEC.

The Starlight chief noted the MEC property has “a little bit of upside left” in terms of potential development.

MEC is about 95 per cent leased, Drimmer said.

The four 15-storey class-A LEED Gold-certified towers were co-owned by Sun Life Assurance Company of Canada and Patria Properties. LEED Gold was achieved as part of a four-year capital investment and the first tower was completed in 1978.

In a leasing profile, Colliers International noted the complex features a total of 4,900 parking spaces which it described as the largest block in the Mississauga downtown.

Starlight, with a portfolio of 34,000 multi-residential units across Canada and the United States and more than four million square feet of commercial properties, has a pronounced preference for the western edge of the GTA when it comes to acquiring in Canada’s largest market.

Starlight owns multi-residential properties near the MEC but no other commercial holdings nearby as yet, although the intention is to add to its commercial portfolio.

Drimmer described the acquisition environment as “tight” currently. “It is not that easy.”

Expect Starlight to keep up its busy pace of acquisitions.

He described value add as buildings that may have occupancy or capital investment issues.

Starlight, a Toronto-based, privately held, full-service real estate investment and asset management company with more than $7 billion in multi-residential and commercial properties under management for joint venture partnerships with institutional investors, is not sitting still.

Drimmer told RENX last summer his company will be “more aggressive and visible as we pursue growth with new and existing investors in both fund and joint venture structures.”

Starlight’s main focus is the apartment sector where it is pursuing a twin track strategy not much different than in commercial real estate: buying quality “core” assets and value add assets that need some TLC – tender loving capital investment.

“Yes is it tight, but we are able to pry some buildings loose.”

Drimmer said Starlight expects to do “a couple hundred million dollars this year” in Canada multi-residential. Counting commercial, that acquisition total could rise to $500 million.

It is also in the U.S. with the Starlight U.S. Multi-Family (No. 5) Core Fund (STUS.A-X) which invests in new, garden-style low-rise apartment complexes in the Sun Belt.