Toronto-based Starlight Investments has added another luxury multi-residential property to its rapidly expanding portfolio in the Greater Toronto and Hamilton Area (GTHA). 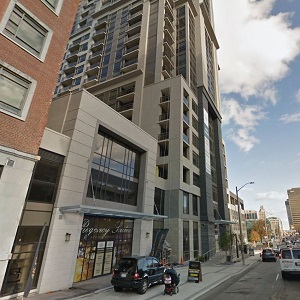 The Regency Suites in Hamilton.

Starlight announced this week the completion of the forward sale of the newly constructed 29-storey Regency Suites in Hamilton. The purpose-built, concrete, multi-residential high-rise is located at 140 Main St. West in the city’s downtown, and is adjacent to another building it purchased a year ago.

“Starlight is pleased to continue to grow its high-rise presence in the Greater Toronto and Hamilton Area with the addition of this luxury multi-residential building situated in the heart of downtown Hamilton,” Daniel Drimmer, Starlight’s chief executive officer, said in a release announcing the purchase.

Regency Suites is in close proximity to Highway 403 and within walking distance to other amenities including restaurants, schools, universities, retail shops, the Art Gallery of Hamilton, parks and public transit.

The purchase complements Starlight’s previous forward purchase of 115 units located at 150 Main Street West, a 10-storey concrete multi-residential building which was completed in 2016.

Its portfolio consists of approximately 34,000 multi-residential units across Canada and the United States and more than four million square feet of commercial properties.

The company’s most recent purchase was just a couple of weeks ago, when it veered from a series of multi-residential acquisitions and bought a 50 per cent stake in the Mississauga Executive Centre.

The 1.15-million-square foot commercial facility is sited on 26 acres at Hurontario Street and Burnhamthorpe Road East, adjacent to the Square One Shopping Centre.

It consists of four 15-storey class-A LEED Gold-certified towers. LEED Gold was achieved as part of a four-year capital investment, The first tower was completed in 1978.

While discussing the MEC purchase, Drimmer told RENX that Starlight plans to acquire a “couple hundred million dollars” worth of multi-residential property in Canada this year.  Including commercial purchases, that total could rise to about $500 million.

Since last July, the company has acquired more than $700 million in holdings.