Starlight U.S. Multi-Family has purchased three American properties for two of its funds, and completed the initial public offering for its Value-Add No. 1 fund. 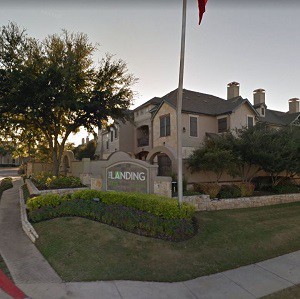 The Landing, a community in Round Rock, Texas, has been purchased by Starlight U.S. Multi-Family. (Google Street View image)

Two of the purchases, made for the Starlight U.S. Multi-Family (No. 1) Value-Add Fund (SUVA.A-X) are in Round Rock, Texas and in Phoenix. They include 943 multi-family residential suites for a total purchase price of US$154.8 million.

The purchases were funded through cash from the fund No. 1 IPO as well as new first mortgages worth US$105 million.

The Landing at Round Rock is located 30 kilometres north of downtown Austin at 7711 O’Connor Rd. It contains 583 suites in 44 three-storey apartment buildings on a 33.2-acre site. The apartments range from one to four bedrooms.

It will be managed by Roscoe Properties of Austin, a regional firm which currently manages 14,000 apartment suites in Texas.

This property will be managed by Alliance Residential Company, which manages more than 99,000 apartment suites in the U.S., including nine Starlight communities.

Executives buy in to Fund No. 1

The same day the purchases were announced, Starlight also said it had completed the Fund 1 offering, raising approximately Cdn$86.1 million. The offering was made through a syndicate of agents, led by CIBC.

Fund 1 was established “for the primary purpose of indirectly acquiring, owning and operating a portfolio primarily comprised of value-add, income-producing, multi-family properties that can achieve significant increases in rental rates as a result of undertaking high return, light value-add capital expenditures and active asset management . . .” according to a Starlight release.

The previously announced purchase of another apartment community in Phoenix, located at 20435 North 7th St., has been completed.

Starlight purchased this 275-unit, class-A, garden-style community for approximately US$50.7 million for its U.S. Multi-Family (No. 5) Core Fund (STUS.A-X).

This property will also be managed by Alliance Residential Company.

Fund No. 5 now has interests in and operates a portfolio of 6,766 apartment units in 23 recently constructed, class-A stabilized, income-producing apartment communities in  Arizona, Florida, Georgia, Nevada, North Carolina and Texas.

Starlight is a privately-held real estate investment and asset management company comprised of approximately 110 employees. It currently owns and/or asset manages Cdn$7.5 billion in assets in Canada and the U.S., including some in partnerships with institutional investors and international family offices.

Starlight has completed transactions worth more than Cdn$1.5 billion, involving approximately 63,000 suites, since its inception.