Adi Development Group has launched a handful of condominiums in Burlington, Ont. over the past few years and its latest, StationWest, seems to be especially appealing to young people. 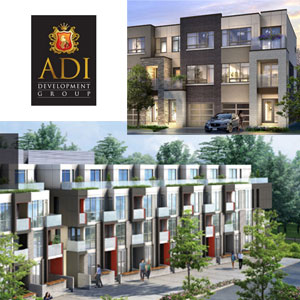 “It’s a function of affordability and debunking the myth that millennials don’t want to own homes, and that we live in this rent as needed world today,” said Adi chief executive officer Tariq Adi. “There are people that still very much want to own a home.”

The appeal to many of these millennials is the development’s location in a mobility hub on 13 acres of reclaimed brownfield land adjacent to Metrolinx’s Aldershot GO station in west Burlington that provides relatively convenient access to other Greater Toronto Area locations.

StationWest has attracted interest from first-time buyers working and renting housing in Toronto and Hamilton who no longer want to rent but can’t afford a single family home in either of those cities or even in Burlington, where Adi said the average price for such a house has reached $1 million.

“That’s where a community like StationWest that offers a multitude of housing types at different prices comes into play,” said Adi. “We saw that in the market and decided to go after it.”

The first phase features condominium townhomes that are approximately 1,800 square feet and include a backyard and garage. They’re priced from the high $300,000s to the low $600,000s and are almost sold out.

The third phase will feature six-storey mid-rise condos, with units starting at around 500 square feet, which will cater to those looking to buy in the $200,000 to mid-$300,000 price range.

The final phase will include 20 townhomes ranging is size from 2,000 to 2,200 square feet and including two-car garages. Adi anticipates that people will be moved in to all phases within the next two to three years and he stressed that monthly condo fees will be as low as $70 to $85.

In addition to the GO station, a bus route passes through the site, car and bicycle sharing programs are handy, walking trails are conveniently located and 250 retailers and service providers are in nearby Aldershot Village. Highways 403, 407 and the Queen Elizabeth Way (QEW) are a short drive away for those with cars.

“Burlington’s in a build-out stage so we’re at capacity when it comes to land development,” said Adi. “The old days of urban sprawl are going by the wayside and there are very few communities left that offer that type of housing.

“Everything that’s been happening has been urban intensification and the gentrification of certain areas and the revitalization of certain corridors that have gotten tired over the years. We’re seeing a lot of pressure on infill development and land prices because the days of sprawl are essentially gone.”

Adi launched its flagship project, the 78-unit Mod’rn, at Guelph Line and the QEW in Burlington in 2013. The modern-looking, design-driven, boutique four-storey condo sold out quickly and is now occupied.

The Link — a 267,000-square-foot, four-building community connected by glass bridges and offering an elevated courtyard and two-level recreation centre — is now under construction. It’s located at Dundas Street and Sutton Drive near Bronte Creek and offers good views of the creek and the Niagara Escarpment as well as easy access to nearby amenities.

“Some of the units started at $279,000, and they’re obviously gone,” said Adi. “But you can get into downtown Burlington for under $400,000, which is unheard of and unprecedented.”

Adi said his company tries to incorporate environmentally friendly materials, energy-efficient lighting, recycled products and efficient waste disposal methods into its developments and is looking at ways to maximize the efficiency of its building envelopes. It’s analyzing the possibilities of including geothermal heating in future projects, though nothing has been decided since Adi calls it a “risky move.”

More on the way in Burlington and Toronto

Adi recently acquired another site in north Burlington that the company is proposing another 700 units for. The developer has also just purchased two downtown Toronto sites: one in the King Street West and Portland Street area, and another near Yorkville and the Annex.

“We’re going to be creating some very exciting projects that are going to be architecturally significant in the next couple of years,” Adi said.