If you want to keep track of the ebb and flow of the Canadian real estate industry, Steve Gupta is a pretty good gauge. 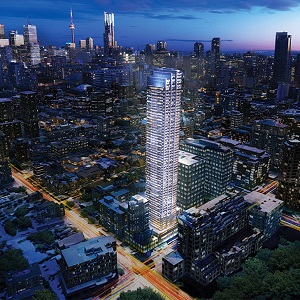 The head of Toronto-based Gupta Group, who was heavily invested in the apartment sector in the 1980s  and ’90s before the rise of Ontario rent control, is a major player in the hot hotel sector and has recently become more involved in condo construction.

Given Gupta’s residential background, the leap into condos was more of a baby step.

A bit of flair

The apartment owner-turned-hotelier-turned-condo developer tries to offer some hotel-style perks to condo buyers as a way to stand out in an increasingly crowded field.

“We are kind of adding in our condominiums the same sort of flair as (in) resort style living,” said the India-born entrepreneur. “So (we) give them some of the facilities that people don’t have in their home that hotels have.”

In Gupta’s Rosedale on Bloor development, condo residents will have access to the amenities of The Canopy, a new Hilton lifestyle hotel.

“I’m a perfectionist. Basically we put our heart and soul in every project and we want to be different than everybody,” Gupta said.

That includes upgraded amenities and finishes. “We provide much nicer porcelain tile, hardwood laminate floors, all good finishes and (we) hired one of the best interior designers who creates a flair.”

More buildings in the works

Besides The Rosedale, situated near Sherbourne and Bloor, Gupta currently has Dundas Square Gardens (Dundas and Jarvis) under construction.

The 50-storey, 1,004-unit tower on the site of the former Hilton Garden Inn is steps away from Ryerson University and in a neighbourhood quickly shedding its gritty urban image.

There is also Yonge Park Plaza, a seven-storey business condo project at 4050 Yonge St. just south of York Mills, that is targeting businesses which would rather own space than rent it. The project has a 2018 completion date.

Gupta, who entered the condo market in 2012 with King Blue in downtown Toronto, has also moved beyond the city’s core. He announced earlier this year his company plans to build a two-tower, mixed-use development in Vaughan that will feature two 50-storey-plus towers (51 and 53 storeys).

The Icona Condominius development will include about 1,140 units and up to 20,000 square feet of retail.

The company has another as-yet-unnamed development in the works for 3450 Dufferin St., across from Yorkdale shopping centre. Comprising three towers with 1,044 residential units and townhomes, 255 hotel rooms and office space, it will also include 24 stories of office space.

Gupta’s Easton’s Group of Hotels also recently announced it had completed a $10-million renovation and renaming of The Westin Toronto Airport.

After purchasing the hotel situated at Pearson International Airport, the company updated all guest rooms and suites as well as the property’s on-site restaurants, Crosswinds Restaurant & Bar and Atmosphere Restaurant.

Given the expanding construction experience in Gupta’s condo and hotel businesses, he decided the best approach would be to handle renovation construction in-house rather than hire an outside contractor, a decision that saved time and money.

“We have a director of high-rise construction here. Everybody chipped in to hire the sub-trades,” Gupta said.

As well, the company is building hotels as part of other developments; a Hilton at its Yonge and York Mills business condo project and The Canopy as part of the upcoming Rosedale development.

A number of older hotels are disappearing to make way for other uses, such as the Delta Chelsea at Yonge and Gerrard, where Gupta will be putting a 300-room hotel. Other sites with older hotel inventory will be repurposed for new development.

With less inventory in the downtown, a strong U.S. dollar keeping Canadians at home and higher international travel, Gupta anticipates the sector will remain strong in the short term.