Sixty per cent of Ottawa’s office space exists outside the downtown core and it continues to experience very different fates depending on location, according to panelists at the recent Ottawa Real Estate Forum. 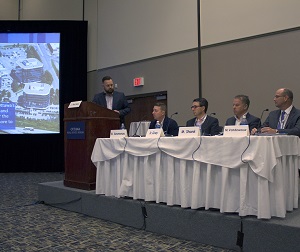 Successes in areas such as tech-heavy, West-End Kanata were compared to a stagnant East End as panelists discussed the factors behind the trends.

“In case you’re not familiar with Ottawa, our competitive inventory for office spaces is about 45 million feet. About half of that space is in markets that we’re going to talk about today,” said Lindsay Hockey, a sales rep at Avison Young who served as panel moderator.

Since 2008, Kanata has been experiencing sustained growth. During the past 24 months, vacancy rates have trended down and Kanata has also enjoyed a positive absorption rate, fuelled in large part by venture capital funding acquisitions of Ottawa-based startups.

The successes of home-grown businesses such as You.I TV and Calian Group have also done plenty for Kanata’s reputation.

The growth has created some challenges. For larger companies looking for spaces of 30,000 square feet and up, the search has become more difficult. Ready-made space which a larger, or growing company can move into is being leased quickly and becoming harder to find.

“It’s nice to see Kanata be, what I would call a mature market now,” said Brent Arseneau, leasing manager and broker of record for Colonnade Bridgeport. “There’s ebbs and flows to market movement . . . what you’re seeing is growth and contraction of these companies to the point where they’re backfilling each others’ space.”

He believes this trend has created potential opportunities to build new space in Kanata, but thinks it means something different for the rest of the city.

“In the rest of the city, yes you’ll see movement, but there are less big blocks of space thanks to the federal government taking up the East. You’re not seeing that growth and contraction. You’re seeing, ‘Oh, this one 25,000-square-foot tenant was here in the city, and now they’re there.’ ”

He noted potential builders will be less likely to add new office space until the other markets in the city see similar absorption, making multi-res and mixed-use developments a safer bet for the suburban market at the moment. Adding to developers’ hesitation when it comes to building office space in the suburbs is the changing nature of both clients and construction.

As urban tech has evolved, so too has the sector’s preference for lease length. As more and more potential leaseholders are coming out of the urban tech field, builders and property managers need to keep their habits in mind. It is rare to see an urban tech tenant sign a lease longer than three to five years.

This creates uncertainty about the ability to sign or retain a tenant for the long term. Add in the rising costs of construction, as well as specific space needs of some tenants, and that might make constructing office space seem risky to some owners.

“This is something that we all need to be thinking about because that world, in my mind, is changing. The day of the $25 TI covering your fit-up is past, long past,” said Dan Gray, vice-president of leasing for QuadReal Property Group. “We’re seeing tenants want some very nice spaces and they’re getting a rude awakening when the bill comes in.”

He explained high expectations from a potential tenant can scuttle a deal when the reality (i.e. the costs) of transforming existing space was put in front of them.

“We’re seeing fit-ups coming in at $85 to $100, and then you’re probably going to add $20 to that in IT and cabling, and probably another $20 in furniture. We have to set reasonable expectations. For tenants with short-term needs, we have to be entrepreneurial.”

These costs aren’t as big a problem for landlords with existing tenants. Marc Shank, vice-president of leasing in Ontario and Western Canada for Cominar REIT (CUF-UN-T), said 80 per cent of Cominar’s new leasing for 2018 has come from expansion by existing tenants.

With Ottawa’s downtown core filling up, and the Kanata market performing well again, other sectors of the city as also, at the very least, seeing stabilization.

Ottawa West has slowing been working its way out of a recent decline, with properties like 80 Aberdeen St. doing five new deals this year and half of that business coming from the tech sector.

Nepean has been stable since 2013. That has continued in 2018, through what was expected to be a weak year, on the backs of companies like Manulife which has been enjoying the success of its 200,000-square-foot, class-A Qualicum Centre on Baseline Road.

Conditions in the East continue to struggle, but that could be about to change. The downturn began in 2014 when key government departments and private sector tenancies left the area, and with vacancy hovering near 20 per cent it still hasn’t recovered.

“We’ve got a lot of positives going on in the East End right now and I think that there’s a lot of potential there,” said Arseneau, drawing everyone’s attention to the fact the OREF was taking place at the Ottawa Conference and Events Centre located in one of the city’s Eastern sectors.

“Where you’re sitting today, you guys are all calling the East End of the city. If you drove from downtown today, ignore the traffic for a second, that’s a five-minute drive,” he said, noting Kanata is a much more remote from the CBD. “Once we get our heads around that, (you’ll see) the opportunities for the East End, right to Blair Road, which is only a couple of kilometres away.”

Several significant government leases could be in the offing. In recent months, the feds issued requests for “expressions of interest” in potential leases ranging from about 30,000 square feet to potentially more than 100,000 square feet.

“The story will start to change in a positive light. The federal government that started this trend in 2014 will also be credited largely with helping to stop it and help things come back the other way, with some notable deals at 250 Tremblay,” Hockey noted, “and strong rumours about more space at Vanier Parkway and Terminal Avenue.”

It’s important for suburban markets to continue to develop office space on their own terms, and not be afraid to stray from the Kanata or CBD models. Martin Vandewouw, president of KRP Properties, says there isn’t a lot of overlap between what is happening in Kanata and the office sectors elsewhere in the city.

“Ottawa is (again) starting to get recognized as a technology hub,” Vandewouw said. “For it to be a real hub, new technology companies coming to Ottawa need a choice.”

He also cited the fact landlords downtown now have a choice between government and technology as tenants, saying the two sectors will continue to compete, and having more offerings is a win-win. Ongoing reinvigoration of class-B space, coupled with Ottawa’s growing reputation, will continue to provide opportunities for existing companies looking for a change, and new ones hoping to move.

“We’ve got the best cost of living in terms of housing, amenities and quality of life. I hope it’s part of the momentum to continue to grow the technology sector.”