Survey shows what renters want and will pay for

“We are getting into an affordability squeeze, so it’s important that owners and builders of properties focus on spending their money on the stuff that really matters.” 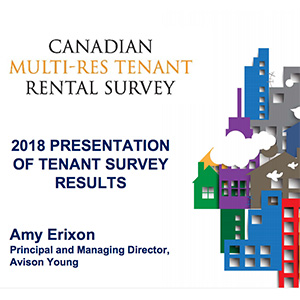 The third annual survey was powered by Yardi, which specializes in property management software and asset management solutions.

The survey presented data to help future-proof buildings, anticipate renters’ desires, and see what they would pay more for. It was analyzed with owners, lessors, city planners and operators in mind to assist them in understanding how tastes are changing and what can be translated into a competitive advantage.

More than 12,000 renters completed the survey — with the biggest representations coming from Toronto, Edmonton, Ottawa and Calgary, and smaller response numbers from more than 18 other Canadian cities.

What renters want, don’t want, and what they’ll spend

Importance of bedrooms and bathrooms

Forty-nine per cent of survey respondents lived in units with two or more bedrooms.

“Those numbers are a lot higher than people think,” said Erixon. “About three-quarters of what we’re building is one-bedroom or studios, whereas half of all the renters are looking for larger units.”

Twenty-four per cent of renters said an en-suite bathroom was essential and 54 per cent said it was nice to have, while 42 per cent would pay extra for an en-suite.

“Whether people use them or not is sort of irrelevant,” said Erixon. “People really want them.”

Seventy-five per cent of renters said while energy certifications are good to have in a building, they weren’t willing to pay more for them, which Erixon said was a reflection of the issues many renters face with affordability. However, a surprising 9.5 per cent of renters were willing to pay from $101 to more than $500 per month more in rent to be in a building with an energy certification.

In order of preference, location-wise, renters want to live near: grocery stores; outdoor spaces and parks; bus stations; retail and restaurants; and close to work.

“If you’re working in a zoning area where you’re required to provide one car per bedroom, chances are that you’re over-parking your building,” said Erixon. “It’s one of the cheapest ways that we can reduce costs and help with the affordability issue.”