Lamb Development Corp. and Movengo Developments have unveiled the details of Television City, which they say will be the largest development to date in Hamilton. 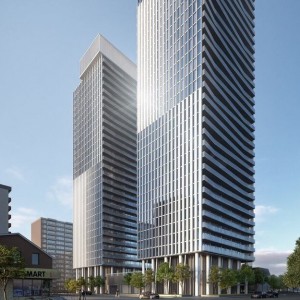 The $360-million mixed-use project will house approximately 618 units when it is complete and occupy 44,000 square feet of land. Located at 163 Jackson St. West, the proposed development will consist two connected high-rise towers, of 40 and 30 storeys.

The name Television City recognizes the site has traditionally been home to the CHCH Television station.

“Hamilton is in the midst of a cultural renaissance, making it one of Canada’s most exciting cities. Its growth represents tremendous opportunity for residents, entrepreneurs and investors,” said Brad Lamb, CEO of Lamb Development Corp., in a release announcing the project.

“The emerging culture, hospitality, medical and technology scene, along with the recent surge in locally based investment, combine to create a vibrant city for buyers and residents of Television City.”

The buildings will feature approximately 485,424 square feet of usable space, with 474,080 dedicated to residential units and 11,344 of retail space. The mansion currently on-site is a heritage building built in 1850 that will be repurposed and maintained.

The development is designed by Peter Clewes of architectsAlliance, with interiors by Kelly Cray of U31.

“We preserved the heritage of the 1850s mansion that housed a broadcast studio for over six decades through features like the playful display of vintage televisions,” said Cray, principal of U31. “The overall aesthetic is nostalgic but modern, with nods to media, expressed through reintroduced elements such as graphic wallpapers containing subtle retro nuances.”

Amenities at the site include:

The condominiums range in size from 400 to 2,000 square feet and include studio, one-, two-, three-bedroom and penthouse floor plans. Some units also include dens.

Prices start at approximately $220,000, which the developers say is about a third lower than a comparable unit in nearby Toronto. In fact, Lamb says Television City is designed in part to appeal to homebuyers looking outside of the downtown core of Toronto.

In the release, Lamb says the aim “is to deliver housing that is urban and modern for those relocating, while simultaneously appealing to existing residents looking to live in a condo community.”

The sales office is expected to open on-site in mid-to-late September. Occupancy is scheduled for August 2021.

Since then, LDC has developed 17 completed projects with four other sites under construction and eight more projects, incorporating 2,600 units, in varying stages of development. Projects in Toronto include glas, Parc, Worklofts, Flatiron Lofts, The King East, Theatre Park, King Charlotte and Brant Park.

Movengo Corporation is a Hamilton-based builder and developer whose president is Aaron Collina. Movengo is also involved in several other projects in the city.