The twin tower Intact Place was built in downtown Calgary 36 years ago and is still performing so well that it earned The Outstanding Building of the Year (TOBY) Award for buildings ranging from 250,000 to 499,999 square feet from Building Owners and Managers Association (BOMA) of Canada on Sept. 22 as part of its BOMEX 2016 conference and exhibition. 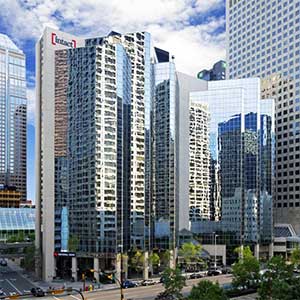 The 464,757-square-foot class-A office complex is home to 40 commercial and retail tenants and boasts a walk score of 96 per cent and a transit score 85 per cent, with city buses and the light rail transit system accessible outside of the front entrance. Three “Plus 15” skywalk systems connect occupants with The Core Shopping Centre, Bow Valley, parkades, hotels and other major buildings in the core. Intact Place offers secure bike storage and shower facilities, an electric vehicle charging station, and a walking path to the Bow River.

While Intact Place’s central location is one of its most attractive features, according to Bentall Kennedy property manager Brenda McManus, the British Columbia Investment Management Corporation-owned property has a lot more going for it than that.

The BOMA BEST Gold-certified and LEED EB: O&M Gold-certified complex was the first office building in downtown Calgary to connect to the city’s district energy system in 2014.

“The biggest impact is in eliminating the capital requirements for replacing aging boilers and the day to day costs of maintaining aging boilers,” said McManus. “With district energy we increased heating efficiency with their equipment running at 80 per cent, whereas our boiler efficiency was 60 per cent.”

“We are particularly proud of the work we have done with our tenants on increasing our diversion rate,” said McManus. “We have increased our diversion rate to 92.9 per cent for the first eight months of 2016 from 55.5 per cent in 2015.”

Bentall Kennedy engages a third party utility management company that monitors consumption and trends and advises the company when there are irregular spikes and assists it in investigating the cause so corrections can be made.

“The focus over the last five years for the building has been upgrading and modernizing the HVAC and base building electrical systems,” said McManus of improvements made to Intact Place.

While tenant engagement is important for recycling programs, responding to service requests, and forwarding information about building operations, it’s also become crucial in a depressed Calgary market where office vacancy rates have spiked and tenants have reduced their space needs. Intact Place is 89 per cent occupied.

A variety of tenant appreciation and environmental events to encourage energy and waste reduction are held throughout the year.