Consistent improvements over the past five years, with more still to come, helped earn London City Centre a The Outstanding Building of the Year (TOBY) Award for buildings ranging from 500,000 to one million square feet from Building Owners and Managers Association (BOMA) of Canada on Sept. 22 as part of its BOMEX 2016 conference and exhibition. 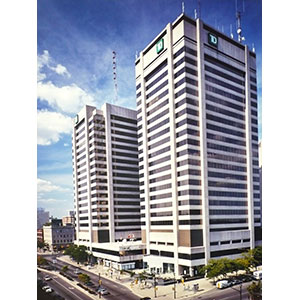 The 42-year-old, 540,785-square-foot complex at 275 Dundas St. and 380 Wellington St. in London, Ont. is owned by Dream Office REIT and managed by Dream Office Management Corporation. Its 23-storey south tower, which was once the city’s highest building, is flanked by a 19-floor north tower.

“We have been quite successful in moving the building from the 20th to the 21st century with technological improvements,” said Kurt Bromhall, who’s been London City Centre’s senior property manager for the past six years.

“I believe what sets us apart is the commitment we have from our on-site staff and management team. We are all involved with finding new ways to be efficient, exploring new avenues that could result in reducing maintenance costs, working smarter, and being an example within the city of showcasing a 40-plus-year-old building that is performing far better than when it was built.”

The efficiency transition started half a decade ago with the retrofitting of all air-handling units with energy-efficient motors and installing variable frequency drives that are tied back to the building automation system. Fifty thousand fluorescent tubes were replaced with new lighting four years ago. Management has also invested in solar harvesting and technology.

Dream replaced 3,910 single-glazed windows with low-emissivity argon double-glazed windows and painted the entire exterior structure with elastomeric exterior paint to seal London City Centre over the past year. It has also replaced its original pump systems with high-efficiency units that are tied back to the building automation system for total environmental control.

London City Centre recently installed an internal bicycle compound and a shower facility to encourage tenants to cycle to work.

“Our next batch of projects for 2018 includes replacement of all of our exterior entrances, continuing with the replacement of faucets and toilets with hands-free units, and replacing main floor ceiling lights with LEDs,” said Bromhall.

London City Centre has increased its waste diversion rate from 26 per cent to 85 per cent in four years by implementing a comprehensive recycling program that includes organic and electronic waste, cardboard, batteries, paper shredding, metals and air-handling filters.

“We receive total buy-in from our tenants in order for this to be successful,” said Bromhall.

These environmental measures have led to London City Centre being recognized by several organizations. It was ISO 14001-certified in 2011. It won the Mayor’s Sustainability Energy Council award for its significant reduction in electricity use, as nominated by London Hydro, in 2015. London City Centre received a BOMA BEST Platinum certification earlier this year in addition to its TOBY Award.

“Recognition among our peers is extremely important to our group,” said Bromhall. “We pride ourselves in our accomplishments, our place in the community and how we are perceived as leaders in environmental and sustainability leadership.”

London City Centre management and tenants support numerous charities and community initiatives throughout the year. Among those benefiting are heart, stroke, cancer and animal organizations. There are also blood, food and toy drives as well as participation in a spring downtown clean-up effort and Tim Horton’s Camp Day in June.

“The main highlight is the annual repelling challenge of going down our south tower 300 feet,” said Bromhall. “We raised $165,000 for Make-A-Wish and are the highest contributor for them in their fundraising initiatives.”