Toronto builder TAS is filling two community needs with its first foray into the apartment sector at 299 Campbell Ave. The development will provide much-needed rental housing in the Junction Triangle as well as a larger, more modern public library branch for the neighbourhood. 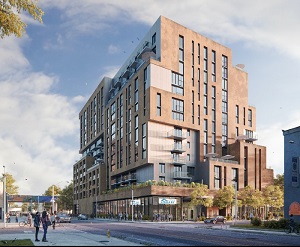 It’s yet another twist on the mixed-use concept, which has become almost the standard for multi-residential projects in many Greater Toronto Area neighbourhoods. Developers are only just beginning to see what they can do with the concept.

The new TAS project, in partnership with Bentall Kennedy, is a 14-storey apartment building with 325 units ranging from bachelors to three-bedroom apartments. It is TAS’ first purpose-built residential rental, though the firm has more than three decades of experience building condos, custom homes and commercial projects.

299 Campbell will be distinctive in part because it will be the new home of the relocated Perth Dupont branch of the Toronto Public Library. The branch will take up 10,000 square feet, or half of the building’s ground floor. The current branch, located in an aging commercial building, is just over 3,600 square feet.

Switch from condos to rentals

“We acquired the property years ago and initially were thinking it would make a great condo development,” said Charlie Scott, the vice president of brand communications and experience at TAS. “In the course of thinking the project through, rolling our sleeves up and starting work on it, we realized there was a real need and opportunity for rental housing.

“Not just in Toronto in general, but in that area specifically.”

After consultations with the city and local residents, TAS discovered the library was seeking a new home.

“We had some conversations with the community and its local councillor, and found out that the nearby Perth Dupont branch of the Toronto Public Library was literally bursting at the seams and getting a little bit threadbare. They felt there was a real need for a new library and there was an opportunity to collaborate with us to see if we could accommodate that library.”

TAS has three decades of history

The company name, TAS, is an acronym for the initials of the parents of company president and CEO Mazyar Mortazavi. The company started small when Mortazavi’s parents moved to Toronto from Iran and built a single-family home on spec more than 30 years ago. After selling the house and repeating the process, the family built a thriving custom home business over the next 20 years.

In the early 2000s, Mortazavi began evolving the business into developments and condominiums. After completing its first larger scale project, the Zed Lofts on Bathurst street in Toronto in 2010, TAS phased out the custom homes side of the business.

299 Campbell Ave officially broke ground on June 16, with a ceremony that included a community barbecue.

Preliminary site construction is complete to prepare the area for utilities, and the build is set to start in earnest later this summer. TAS expects it to be available for occupancy in 2021.

The project comes hot on the heels of TAS’ two most recent developments, Duke in the Junction, and Kingston & Co in the Upper Beaches. Duke in the Junction was completed and fully occupied a year ago. It contains 92 condominium suites with an LCBO occupying its one retail space on the ground floor.

Kingston & Co contains 143 suites, is on the cusp of completion and is already at 75 per cent occupancy.

TAS also has several other future projects in its development pipeline.

“Projects take time to find their feet and develop their vision so we have a number of properties we acquired, in some cases more than six or seven years ago,” said Scott. “Nothing is for sale, no buildings are designed yet, but we’re working through the rezoning process, with a team of architects and a broad team of consultants to develop our ideas.

“We also work with the community to find out what they need and what will serve them well.”

The most significant of the upcoming projects will be 2 Tecumseth, which will sit on a large, five-acre site which used to house the Quality Meat Packers slaughterhouse operation. Scott said construction on this project is about a year away, with TAS and the city currently working on rezoning the property to define exactly what form the development will take.

Current plans presented to the city and public earlier this year are for a mixed-use development with a mix of commercial, residential rental and condominiums, office space, and a large amount of indoor and outdoor public space. It will be the company’s largest single project to date and could contain a half-dozen buildings ranging from just a couple of storeys, to high-rise towers.

“We’re going to continue delivering on our promises of great design, great economic and cultural impact, and being socially and environmentally responsible,” said Scott. He said “cookie-cutter design” is not something TAS wants to get into — it wants to focus on building better, distinctive buildings instead of templates.

TAS has even hired an in-house consultant to examine the construction methods it uses and compare them to newer, more innovative methods which are both more environmentally friendly, as well as easier and more affordable to build.

“We push ourselves in all these areas. Whether it’s urban agriculture, community engagement or environmental sustainability, we want to keep pushing ourselves to do a better job while growing as a business and continuing to acquire sites.”