While The Behar Group Realty Inc. (TBG) has just undergone a change at the top, the familiar names still involved aren’t planning any major deviations from the course the company has taken. 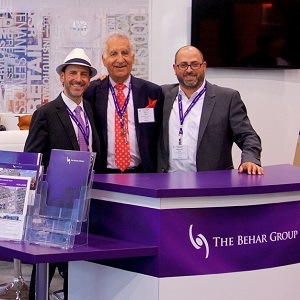 “We wanted to celebrate our 25th anniversary with the official and successful transition of ownership from father to son,” said Avi Behar, who retains the title of chief executive officer and becomes chairman of the board.

Behar will continue to lead the company’s development of its capital markets, landlord and tenant services, and mixed-use business segments. He’ll also oversee further expansion into project and construction management and other advisory services.

Behar and Greg Evans completed an agreement to purchase all of the company’s shares from previous president and broker of record Yosi Behar and his wife Muriel. Avi is the couple’s eldest son. The details of the sale haven’t been released.

Yosi Behar will remain with TBG with a focus on capital markets, development land sales and automotive. He’s assumed the title of founder, broker.

Evans, who joined TBG in 2002, is now president and broker of record. He’ll remain active in a broker and business development role while assuming day-to-day oversight of the operational side of the brokerage.

“We certainly expect there to be an adjustment period for the leadership and administration team during these first few months,” said Evans. “Once settled, we plan to implement the initial phases of our short-, medium- and long-term strategic plan.

“Too much change too quickly is something we won’t do. Our business culture can’t and won’t be compromised with uncontrolled and careless changes made for the sake of change.”

TBG was established as a home-based family business in May 1992 and has grown into a vibrant full-service boutique brokerage with more than 40 team members. While it’s best known for its work in the retail and food and beverage asset class of commercial real estate, it’s also active in the automotive and hotel sectors, office and industrial leasing, development land and investment sales.

TBG is based at 1170 Sheppard Ave. W. in Toronto. Evans hopes to open a downtown Toronto office next year and doesn’t count out further expansion.

“While we have been considering opening offices in other Canadian and international cities, we won’t rush into that. Those moves will depend on finding the right regional partners. For now, we handle national and international mandates through strategic partnerships with the best local brokers in each market.”

TBG was awarded the REX Industrial Lease of the Year Award for real estate excellence by NAIOP for representing The Brick in securing a 900,000-square-foot regional distribution centre in Brampton with Giffels in 2004.

TBG also played a part in the sale and establishment of the first all-Muslim cemetery in Canada, which was unique in extending services to Shi’as and Sunnis alike, according to Avi Behar.

“We are proud to represent some of Canada’s most prominent urban mixed-use developers, such as Tribute, Cityzen, Reserve and others with commercial retail projects throughout midtown, downtown and throughout the Greater Toronto Area,” said Evans. “We are incredibly proud to have over 300 retail commercial listings in the GTA.”

TBG sees itself as an ambassador when it comes to representing both small and large tenants, and in helping them secure the strongest location possible, said Evans.

“Along with many professional office and industrial tenants, we enjoy strong relationships with many prominent retail brands, such as Hyatt Hotels, Moleskine, Dave & Buster’s, Sport Clips, Sally Beauty Holdings and more.”

TBG equals “To Be Great”

Evans emphasized TBG wants to be known as much more than a retail leasing office, and it will continue to grow and open new doors of opportunity.

“TBG stands for a lot of things. It will always stand for The Behar Group, but recently we have developed a new slogan: TBG equals ‘To Be Great.’