Construction appears to be drawing closer for a multi-phase redevelopment of the sprawling 684-acre Woodbine Racetrack property in northwest Toronto now known as Woodbine Districts. The property is actually larger than Toronto’s downtown Central Business District. 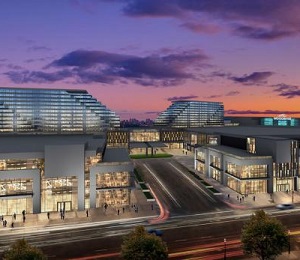 An artist’s conception of a portion of the Woodbine Districts. (Rendering courtesy Woodbine Entertainment Group)

Rezoning and site plan approval submissions have now been filed with the City of Toronto, after its Design Review Panel was able to review and comment on proposals for the site in November.

The Design Review Panel is comprised of architects, landscape architects, urban designers and engineers who provide independent and objective advice to city staff that’s aimed at improving matters of design that affect the public realm. This includes such things as preserving the uniqueness of a place, maintaining vitality, ensuring comfort and safety, and making a new development compatible with its surroundings.

“It was very constructive feedback, and much of their recommendations have now been inserted into our plans and our vision,” said Max Reim, co-managing partner and principal of Live Work Learn Play, which has partnered with Woodbine Entertainment Group on the development for the past three years.

“It was extremely helpful, and things are going very well with both the city and local staff.”

Reim also said substantial outreach has been done with dozens of stakeholders and community feedback has also been very encouraging.

Architectural plans and renderings for the master-planned community have now been filed, and the plan is to leave about 200 acres of the site dedicated to horse racing operations. For those who don’t play the ponies, however, there are plans for plenty of additions to a property larger than downtown Toronto’s business district.

One proposed block of space includes four buildings, between one and three storeys, with approximately 69,000 square feet of retail space along with an outdoor plaza and a 131-space surface parking lot.

Two 12-storey hotel towers, with 419 and 547 rooms respectively, would connect to the existing grandstand and overlook the racetrack. An application has been submitted to the city to allow table gaming in the existing racetrack building.

A seven-level garage would separate the hotel and entertainment space from 102,000 square feet of additional single-storey retail. The proposal is for 4,350 parking spaces, with 1,240 located below the entertainment building.

There are plans for about 429,000 square feet of landscaped areas and green roofs to top some of the buildings.

There are height and sensitive-use restrictions for the site due to its proximity to Toronto Pearson International Airport and airplane flight patterns.

“We’re looking at very dense, mixed-use, mid-rise, interconnected districts, which is why the project is now called Woodbine Districts,” said Reim. “The goal is to create an absolute model city within a city.”

Looking further down the road at additional uses on other parts of the site, Reim said the developers are also contemplating “education campuses, health and wellness villages, biopharma and innovation campuses, indoor and outdoor sports and recreation concepts, an array of housing and potential large-scale venues, and educational sports medicine concepts.”

Reim said Woodbine Districts is in the airport employment zone and provides thousands of jobs, while the race track attracts about six million visitors annually. It will also be part of a mobility hub involving the airport, public transit, surrounding highways and roads, and options for pedestrians, cyclists and autonomous vehicles within the site.

“An entire laundry list of architects, designers, engineers, master planners, marketing people and much, much more” are involved with the project, according to Reim.

“The vast majority of all professionals are coming from the local Greater Toronto Area market, but we’ve also included international talent such as SWA out of its Laguna, California office, as well as Lemay out of Montreal and Toronto. IBI Group is taking a lead role in the project.”