The neo-classical former Bank of Toronto property, which has sat empty for more than a decade in its namesake city at 205 Yonge St., is on the auction block. 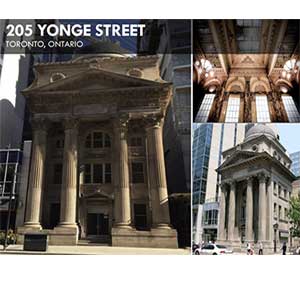 “It just got on to the market and we’ve received a ton of emails from agents that are reaching out to us,” Core Consultants Realty Inc. managing director Shawn Abramovitz, who became the listing agent on Feb. 17 and opened the bid process four days later, said on Tuesday. “We’re going out to a buyers’ list as we speak.”

The heritage-designated building was constructed just north of Queen Street in 1905. It was designed by architect E.J. Lennox, who was also responsible for other iconic structures in Toronto, including Casa Loma, Old City Hall and The Omni King Edward Hotel.

The four-storey building with touches of Beaux-Arts design features Corinthian columns, ornate stonework and a domed roof. Inside, its banking hall features a double height ceiling, soaring windows, marble walls, black and gold detailing, and a mosaic floor. It offers 17,423 square feet of space over four levels as well as a fully usable basement.

The visually striking building is on a 4,356-square-foot lot across the street from the CF Toronto Eaton Centre and is within easy walking distance of new condominiums, hotels, the financial core, Yonge-Dundas Square, Massey Hall, The Elgin and Winter Garden Theatre Centre, Ed Mirvish Theatre, Hockey Hall of Fame and other attractions.

“We’re looking to break some (price) records on a per square foot basis in the area,” said Abramovitz. “It’s one of the most iconic pieces left on Yonge Street.”

Abramovitz believes 205 Yonge could again be resurrected as a bank or would be appropriate for a high-end retailer or a company looking to “make a splash with a flagship” office location.

“I think it’s suitable for somebody who’s looking to buy a trophy asset. There are buyers out there from foreign countries that specifically buy trophy assets.”

Heritage Toronto occupied 205 Yonge from 1992 to 2001, when it was purchased by Irish businessman Thomas Farrell. Farrell has done little with the property since despite interest from condominium developers and restaurant investors. A CBC report earlier this month said Farrell was in negotiations with someone to operate a boutique hotel and museum at the property. However, since it’s been put on the market, that deal appears to have fallen through.

The heritage designation for the exterior and interior of the building protects it from alteration and may present a challenge to someone wishing to redevelop it. Sitting unoccupied for so long will likely mean 205 Yonge may require some extra work to get it back to its former glory, Abramovitz concedes, without wanting to comment further since he said he’s not an expert on construction or maintenance.

“With the lack of product on Yonge Street, I don’t think it’s going to be difficult to sell,” said Abramovitz.

“It’s a piece of history for Toronto. It’s where Timothy Eaton put all of his money back in the day.”

Prospective purchasers are asked to request a confidentiality agreement that must be signed and returned to Core. No bids will be accepted after 5 p.m. on March 23.