During the next decade, the City of Ottawa might finally shed some of its reputation as a big city with a small town feel. That’s certainly likely to be the case in and around its downtown. 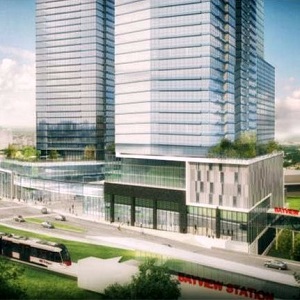 During a session at the 2017 Ottawa Real Estate Forum examining what the city might look like in a decade, executives crafting four of Ottawa’s largest developments offered overviews of their projects and weighed in on trends shaping their planning and construction.

“The City of Ottawa has reached a threshold population. A million people in Ottawa and 1.5 million in the greater Ottawa-Gatineau area is creating some new exciting opportunities in terms of jobs, housing, services and diversity,” said the conference moderator, Ted Fobert, founding partner at Fotenn Consultants.

He said 60 per cent of housing starts in the city are apartments and townhouses. This marks a shift towards increased density and infill in urban areas, concepts which are being promoted by the city.

This, in turn, leads to more commercial growth drawn to intensified areas.

Stage 1 of Ottawa’s light rail transit system, the Confederation Line which includes a downtown tunnel, will be operational in 2018 and is reshaping development along the east-west corridor.

But the first project up for discussion precedes the LRT growth. The changes at Lansdowne Park created a revitalized venue with a mix of retail, condos, townhomes and the 24,000-seat stadium. The project brought more visitors to the area and has become a case study on whether denser pockets in Ottawa can accommodate the shift to heavier reliance on public transit.

“The original idea was to bring CFL football back to Ottawa. It also started with a problem the city had of having a derelict site right in its core.” said Bernie Ashe, the chief executive officer of Ottawa Sports & Entertainment Group.

He explained the need to rejuvenate the area, once a hub of activity for the region. To do so, much of the on-site parking was eliminated, meaning an extensive public transportation plan had to be created — especially for large events such as football, soccer, junior hockey games and major entertainment shows.

“The experience Lansdowne has had proves that the transportation model worked,” Ashe said. “It’s become a really positive experience for Redblacks fans who, 56 per cent take the bus to the games. Nobody believed that would happened and it’s happened.

“We get the odd 58-year-old taking their car to the game and complaining that they can’t find parking, but anyone under 35, they just get it.”

This bodes well for ambitious developers like the Trinity Development Group, which was involved at Lansdowne and now leads two major upcoming developments, at LeBreton Flats and the Trinity Centre at Bayview Station. Both of these projects will sit on the LRT line.

Mark D’eon, senior vice-president of leasing at the Trinity, said due to ongoing negotiations with the National Capital Commission, he could not provide any specific details about LeBreton Flats. It is known the multi-use development will include a new arena for the Ottawa Senators hockey team.

Other specifics, however, remain under a “cone of silence” he said.

D’eon was happy to discuss the plans for the Trinity Centre.

“This is the largest project that Trinity has ever done,” said D’eon. The centre, set to break ground by the end of October, will be another mixed-use site. Three towers higher than 50 storeys will include 1,400 residential units, 200,000 square feet of office space and 130,000 square feet of retail.

“The demographic shift in Ottawa is key. There’s always been a big tech sector here and the type of employees being drawn to Ottawa are the demographic this project will resonate with. It’s on transit, you don’t need a car if you choose not to have one, and there’s quick access to downtown and amenity space.”

Bayview, located near the western edge of the central business district and Parliament Hill, is the only place where the city’s two LRT lines will intersect. With a projected 18,000 transit riders per hour at peak times, proposed developments bank heavily on the successful implementation of these transit initiatives.

Just a few blocks away is another major, master-planned development in the planning stages called Zibi. Windmill Developments in conjunction with Dream are leading this project, which sits a few hundred metres from the LRT line and straddles the Ontario and Quebec border. As such, portions of this 37-acre mixed-use community will be built in both Ottawa and neighbouring Gatineau.

It will focus heavily on the development of waterfront properties and evolving the idea of Ottawa-Gatineau as a region, instead of just two very close cities. Plans include 2,200 residential units and 1.5 million square feet of non-residential space, the heart of which is located between Ottawa’s Pimisi Transit station and the Portage bus transfer station which serves both cities.

“We’re not uncomfortable with our proximity to Pimisi. What’s more uncomfortable is because we’re spanning interprovincial jurisdiction, the intermodal plan from a regional point of view is somewhat dysfunctional.” said Jonathan Westeinde, chief executive officer of  Windmill Development Group.

Due to the scope of Zibi, Westeinde said the plan is for the Ottawa portion of Zibi to reach full buildout and absorption in about 12 years. The Gatineau portions could take as long as 20 years.

The final developer at the panel was eQ Homes, discussing its Greystone Village project. This planned 26-acre community in Old Ottawa East will have as its centrepiece 1,000 residential units.

It will also create a mix of commercial units along Main Street, which is also looking to adapt to the city’s changing identity.

“We’re dependent on a lot of the same things as (the other panelists), like everybody in this room buying investment condos for their children,” joked Josh Kardish, vice-president of eQ Homes.

To entice the community’s desire to embrace infill, the project also features public facilities ranging from park space to a mixed-use heritage building.

Greystone Village includes a mix of low-rise, freehold development which is sold out and being occupied. eQ projects two occupants per week will move in over the next three years to the townhouses and homes.

The company is also about to break ground on its first mid-rise building — which will increase the density of the community.

“It is a tricky marketplace and we can’t possibly meet our intensification objectives unless we build at density here.”

All of the panelists agreed that, with the city itself trying to drive growth back to its downtown core, Ottawa’s future hinges on higher density developments and intensification.