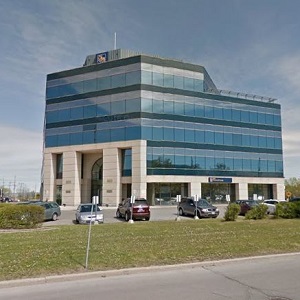 Office buildings at 303 and 301 Moodie Drive in Ottawa are among a $1.6.1-million purchase of five properties by True North Commercial REIT. (Google Street View image)

The trust will spend about $106.1 million to make the acquisitions. The properties are:

“These properties not only meet our core acquisition criteria, but also position us for growth by establishing a presence in new markets,” True North president/CEO Daniel Drimmer said in a release.

“With these acquisitions we have added our first location in Halifax and increased our footprint in Victoria. This, along with our disciplined approach, help to ensure continued expansion and diversification of the portfolio with credit-rated and government tenants secured under long-term leases.”

On Thursday afternoon, True North said it will increase the share offering it had also announced on Wednesday. The REIT is now seeking to raise about $35 million through the sale of 5,575,000 units at $6.28 per share. The original offering was four million shares to raise about $25 million. In a release, True North said the increase is due to demand for the offering, a portion of which will be put toward these purchases.

The purchase price represents a combined implied capitalization rate of 6.9 per cent. Upon completion of the purchases, True North expects its occupancy rate to remain stable at 97.1 per cent. The REIT’s aggregate portfolio gross revenue from government and credit-rated tenants is anticipated to be 84.7 per cent, and average remaining lease term will be 4.3 years.

“Using capital efficiently, while remaining poised to act on opportunities, continues to be a priority. These acquisitions deploy the proceeds of our July offering and a portion of the bought deal being announced today,” Drimmer said.

The Victoria property is a four-storey office building in the central business district. Situated on 0.27 acres, it is BOMA Best Level II-certified and features 34,400 rentable square feet. The building, which is 100 per cent occupied by a government tenant, is being purchased for $11.3 million.

This seven-storey class-A office tower is located in the East Beaver Creek Business Park in Richmond Hill, north of Toronto. Situated on six acres, it features 120,200 square feet with 472 parking stalls. Approximately $2 million in improvements have been invested in the building over the last five years and it has achieved BOMA BEST Level II certification. With an average remaining lease term of 3.6 years, the building is 99 per cent occupied. The purchase price is $29.8 million.

These four-storey and five-storey office buildings are positioned between high tech parks in Kanata and Ottawa’s downtown core. Situated on 4.51 acres along Moodie Drive, they feature 148,500 square feet with 585 parking stalls. The property has easy access to highways 416 and 417 and is located near the planned terminus of the city’s East-West LRT Confederation Line, which is being extended to Moodie Drive by 2023. The buildings, which are 85 per cent occupied, have an $18 million purchase price.

This site is comprised of two low-rise class-A office buildings (known as Ravine Centre I and II) in one of Halifax’s fastest developing urban nodes. The buildings are situated on 10.1 acres, featuring 129,200 square feet with 380 parking stalls. They’ve achieved BOMA BEST Bronze certification at Ravine Centre I and LEED Gold certification at Ravine Centre II. With an average remaining lease term of 4.6 years, they are 73.4 per cent occupied. The purchase price is $31.3 million.

This four-storey office building, centrally located and easily accessible to the Cambridge and Waterloo regions, is being purchased for $15.8 million. It features 60,600 square feet with 500 parking stalls. With an average remaining lease term of 6.4 years, the building is 100 per cent occupied.

The updated agreement with a group of underwriters led by CIBC Capital Markets and Raymond James Ltd., is to sell on a bought deal basis, 5,575,000 trust units at a price of $6.28 (the same price as the original, smaller offering).

The REIT has also granted the underwriters an option, exercisable for a period of 30 days following the closing of the offering, to purchase up to an additional 836,250 units to cover over-allotments, if any. The offering is expected to close on or about Oct. 20 and is subject to normal conditions and regulatory approvals.

Editor’s Note: This story was updated Thursday afternoon with information about the expanded share offering by True North.