True North Square is a historic development in Winnipeg in many ways. It’s not just its scope: several hundred thousand square feet of office, retail and residential space, along with a massive public plaza to host future fan “Whiteouts” for Winnipeg Jets Stanley Cup playoff runs. 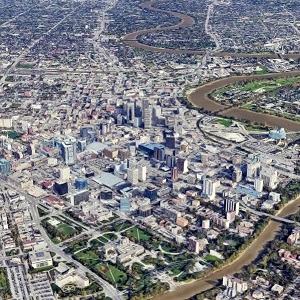 The downtown Winnipeg office market is about to be transformed by the True North Square development. (Google Maps image)

“It’s pretty incredible to think that there has not been a new, speculative office tower in the City of Winnipeg in over 30 years,” Hall Hursh said of the $400-million, mixed-used development adjacent to Bell MTS Place, home to the Jets and some of the city’s largest entertainment events.

Speaking at Wednesday’s Winnipeg Real Estate Forum at the city’s newly redeveloped RBC Convention Centre (also adjacent to the project), Hall Hursh said True North Square has generated excitement and interest among Winnipeg and even outside businesses looking to relocate to its flagship 365,000-square-foot office tower.

The first of four skyscrapers to be completed on the site, the 17-storey Scotiabank Tower, is more than 50 per cent leased and expected to open officially this summer.

Yet the addition of new, high-quality office space has also created challenges for the city’s existing owners of office space, according to developers and brokers on a panel focused on Winnipeg’s office real estate market.

While the city’s office market has remained relatively stable — with vacancy rates between 6.5 and eight per cent during the past eight years — it “is typically classified as musical chairs with tenants moving between buildings,” says Ryan Munt, a sales and leasing associate with Cushman & Wakefield Winnipeg, who moderated the discussion. (By comparison, downtown Toronto’s office vacancy rate was 2.6 per cent at the end of 2017, an Avison Young report stated.)

The addition of the True North Square project has increased the velocity of this trend in the last two years, he noted, putting pressure on all existing office properties. In particular, class-B and -C owners will need to offer more to keep tenants and attract new ones to maintain occupancy rates — though class-C vacancy rates are the lowest of the three for the first quarter of 2018 at 5.9 per cent.

“Landlords with existing buildings are going to have to start reinvesting into what they can control,” to compete, said Chris Vodrey, director of leasing for Manitoba and Saskatchewan for Morguard Investments Ltd. (MRC-T).

To that end, they must upgrade existing office space with value-added amenities like showers and gym facilities, enhanced safety and security, food and drink amenities and parking.

“If you want tenants, you have to move more aggressively than before.”

Among those seeking to do more is local landowner Carmyn Aleshka, president of Winnipeg-based Paradigm Insurance Inc, who purchased 200 Portage — the former Scotiabank office tower — for $16 million last year.

“People need a vision built for them,” said Aleshka. Otherwise, “they don’t necessarily see what a building could be.”

All too often, potential tenants look at older buildings through the lens of the role these properties once served.

“Having a past government tenant in there for the last 20 years, people just brush it off and aren’t really willing to have a look at it,” Aleshka said.

To be successful, existing owners need to create new paradigms for offices that are exciting, particularly to tech companies sprouting up in the city.

Think “the Google model for office space, encouraging their employees to be able to have fun and create camaraderie,” she added.

More broadly, tenants want open-concept layouts, with plenty of daylight and a preference for glazing over drywall and cubicles, said Brad Goerzen, senior vice-president of leasing for the central region at Artis REIT (AX-UN-T).

He cited the efforts of the real estate investment trust, headquartered in downtown Winnipeg, to improve its existing properties. These include a $25-million upgrade at 360 Main Street at Portage and Main — historically the most important nexus of office space in the city.

He noted the True North development and the loss of Great-West Life — an anchor tenant at its 220 Portage Avenue tower — have had “a disruptive effect” on its portfolio of nine downtown office buildings totalling more than 1.5 million square feet.

“There has been a tremendous amount of work just to remain status quo in the market,” he said. Artis’ office vacancy rate is 10.5 per cent today, slightly higher than 10 per cent in 2016 — around the time plans for True North Square were officially unveiled.

Going forward, all the panel experts forecast the office market will likely favour tenants for at least the next two years.

Still, landlords and developers have reason to be optimistic. Winnipeg has a burgeoning technology sector, bolstered by the recent announcement one of the world’s leading video game-makers, Ubisoft, will open an office in the Manitoba capital, investing $35 million and creating about 100 jobs.

Existing office space owners will need to look more and more to growing sectors like tech — with their younger workforces — to sop up excess supply left by the trend of more mature businesses downsizing their physical footprints, Aleshka said.

A property must “stand out — especially with millennials who want an office space where they can have fun.”

“Right now, our downtown doesn’t have a critical mass of people after nine to five,” she said, adding True North Square’s 130-residential-unit tower, expected to open in 2020, will help create a bustling after-work-hours atmosphere found in many other major North American city centres.

Additionally, Artis is developing a 40-storey mixed use tower near Portage and Main which will add more than 300 residential suites to the area.