Calgary-based developer and builder Truman Development Corp. has begun construction of its master-planned community in the southwest part of the city that will feature a Central Park, a main street, almost 1.7 million square feet of office and retail space and thousands of new homes spread across a 100-acre site. 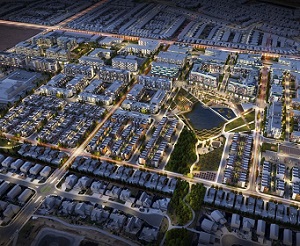 The West District in Calgary is a master-planned community being constructed by Truman Development Corp. (Rendering courtesy Truman)

Oliver Trutina, vice-president with Truman, said the 15-year build cycle for West District includes 2,758 homes. About 2,000 of the residences will be multi-family properties, the rest single-family homes and townhomes.

“There’s about 1.295 million square feet of office space which will be brought on, obviously, when things turn around but in the later phases. And we have about 382,000 square feet of retail,” said Trutina.

“The majority of it all is concrete Triple A construction (residential) buildings. The first two buildings that are under construction right now is called Gateway. Eight-storey mixed-use buildings with retail down below and about 216 doors above on the upper seven floors ranging from one-beds . . . all the way up to 2,500 square feet. We’ve got the full range of unit types or residences offered at Gateway.”

Gateway, the only residential project currently under construction, is expected to be completed by the end of 2019. There will be about 30,000 square feet of retail on the main floor.

The Gateway project carries onto the Main Street concept of West District. This means the retail space will be located at street level with residential above, and all positioned along routes leading to Central Park. Behind Central Park will be more homes.

West District, in the southwest quadrant of the city, is located within the communities of West Springs and Cougar Ridge.

Trutina said Central Park will be an eight-acre crown jewel in West District. The idea is to create a recreational destination through park amenities such as perimeter walkways, a wetland boardwalk, amphitheatre, splashpad and playground, seasonal skating rink and an adult-oriented recreation area that features a skatepark, sports court and bouldering wall.

“We are turning it into a multi-node gathering place where people can come all during the year,” he said. “It’s pretty intense. There’s nothing like this in Calgary.”

Central Park construction will begin this year with expected completion by the end of 2019.

“That will be the anchor for the entire community.”

Trutina said the office component of the project will most likely be constructed mid-stream of the entire development and will be a campus-style area of space.

“For retail, the minimum would be about 250,000 square feet and the top will be around 380,000 square feet. It just comes down to what product we’re building at that time and what the market is looking for,” he said. “We’re trying to do a curated approach in terms of our retail. We don’t want to just slam in anything and everything.

“The tenants and the mix that we’re trying to bring in, be it from urban markets to boutique-type grocers, retail fashion . . . that they have more of an active storefront to kind of engage people and bring them in from the street.”

The family-owned Truman company has been building in Calgary and surrounding areas for more than 35 years.