Eight students from the University of British Columbia are still on a “winner’s high” after besting a competition to design a mixed-use master planned community at Coquitlam Central station in Metro Vancouver. 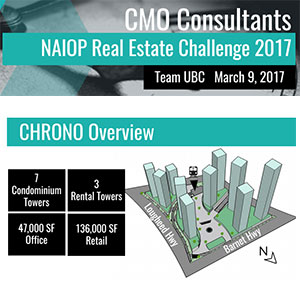 The students had about two months to create the design for TransLink’s Coquitlam Central station on the new Evergreen Line SkyTrain extension, which opened in December.

Their plan featured a pedestrian plaza at the same grade as the SkyTrain platform, giving the development a direct link to mass transit. The design included parking beneath the development.

The competing teams saw the site for first time in January and presented their ideas on March 9th in front of a panel of judges, TransLink officials, and members of commercial real estate industry.

“We were absolutely ecstatic,” said Stephanie Yeargin, a team member who studies at UBC’s Sauder School of Business. “It was one of those things like we felt we couldn’t lose, because it was in Vancouver for the first time in 14 years.”

The students used Whistler Olympic Plaza as a guiding concept. “In Whistler, you park your car in one place and all of the pedestrians are together in this one main plaza,” she said.

The students designed a large central plaza full of shops, restaurants and bars that would attract a lot of foot traffic. Feedback from other transit-oriented developers suggested the best designs keep people in a clustered area and away from vehicle traffic, she said.

“We wanted to keep the design introverted,” Yeargin said. “I think that really helped us out because some of the other proposals were a little bit of the opposite, which I think takes away from that sense of place.”

Entertainment was a key component in the plan.

“We were looking at anchors and we decided to go with the Cineplex’s Rec Room in our proposal, which is currently in Toronto and Edmonton and has been really successful,” she said, referring to the new entertainment centres blending gaming with live performances, bars and restaurants.

“It was a difficult decision to make, as we were very impressed with all of the proposals from the students,” said Guy Akester, TransLink’s director of real estate programs and partnerships.

“Coquitlam Central Station is a very important and critical transportation hub. Ultimately, we were looking for a highly walkable, mixed-use site that brings the community together. The UBC students were able to deliver this on all fronts.”

Most high-density development in Metro Vancouver is now based around transit hubs on the SkyTrain and Canada Line and are very challenging and complex, said John Middleton, vice-president at Onni Group and the chair of the 2017 competition.

“The resulting expertise developed in Metro Vancouver is renowned throughout North America and we felt the challenge was a great avenue to promote some of the future generation of our industry experts,” he told RENX in an email.

The UBC team stood out because they did a good job of matching their density to the realities of the regional market, he said.

“We felt like the UBC team were able to provide a site that created a unique sense of community while at the same time efficiently incorporated the existing bus, Evergreen Line and West Coast Express transit systems.”

He said scoring was based on market assumptions, logic, the development solution and the overall presentation of the proposal to the judges.

Development at the site is still years away as the city still must update its land use permissions at the property.

Yeargin said they would be happy to have elements of their design used in the eventual development of the site by TransLink and its development partner.

“TransLink certainly has the option to implement any ideas that we have. Nothing is guaranteed, of course, but we hope that they’ll at least take some into consideration,” Yeargin said.

“We don’t have any role going forward with that development specifically unless we end up working for one of the firms that do become involved.

“It will be interesting to see over the next five years, if we all stay here, what will happen with that property.”