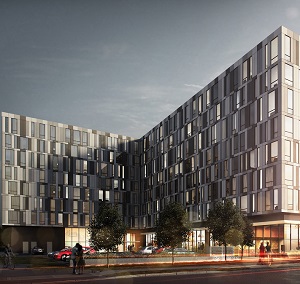 “University Studios was conceived through our existing knowledge of the specific location and competition around the campus at UOIT and Durham College in Oshawa,” said Podium managing director Bernard Luttmer.

More to come: Watch for more about Podium and its other developments in Thursday’s Property Biz newsletter.

“The market had no single-occupant units, none that fit the small premium market we identified for this site, and this site was the best to do both, as it was the closest site possible to campus without being on campus.”

While University Studios was originally conceived as a four-storey project, it was increased to eight.

Podium had previously sold 400 furnished condominium units at two sites in Kingston, Ont., which were aimed at the student market and sold out in several weeks. This gave the Toronto-based developer confidence and structure which could be applied to the Wallman Architects-designed University Studios.

“Owners have the option to utilize on-site property management and leasing management services to maintain and lease out their units, most notably to students looking for a furnished place to live solo,” said Luttmer.

“It combines residents with the option to live independently in their own unit — without sharing bedrooms, bathrooms or living space — while being surrounded by similar residents, common student-focused amenities and at-grade commercial spaces. They can walk out their door and be at their classes inside of 10 minutes.”

While SmartStudios range in size from just 274 to 374 square feet, they include: a three-piece bathroom; a washer/dryer; a storage area; a kitchenette with microwave, stovetop, dishwasher and fridge; a study area; a lounging area with extra storage underneath; and a military-grade table-bed combined with a four-seat dining table to enhance space economy.

“The university student of today is not quite the same as the student of some 30 years ago,” said Building Capital chief executive officer Saqib Qureshi. “One significant change is in their lifestyle expectations.

“We felt that students wanted their own showers, kitchens and private space, and that they were willing to pay a small premium for that. I think University Studios was as much a response to this learning as it was in meeting the demand for student residences per se.”

Starbucks, Domino’s Pizza and Osmow’s are on the ground floor of University Studios to provide food and beverage options for residents and others living, working or attending school in the neighbourhood.

Podium was founded in 2004 and has developed 16 projects at urban infill locations in Toronto, Oshawa, Kingston, Barrie and Guelph, Ont. It has nine other projects in development in Canada and the United States.

Markham-based Building Capital was formed in 2008 as a specialist developer and investor in student living and commercial real estate. It has developed several student living projects in southern Ontario.

THURSDAY: Watch for more about Podium’s history, and its other projects in Canada and the United States, in Thursday’s Property Biz newsletter.