A major cultural shift going on in downtown Ottawa is having a positive impact on the city’s office market. 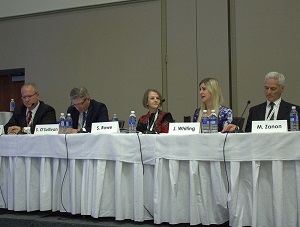 An influx of growing urban tech tenants, new developments, the looming impact of LRT, and federal government leasing prospects were among the subjects discussed by panelists exploring the transformation at the Ottawa Real Estate Forum on Oct. 16.

“The health of any office market is determined by many factors. The first metric many of us reach for is vacancy,” said moderator Nathan Smith, senior vice-president at Cushman & Wakefield Ottawa, who set the backdrop for the discussion.

He noted two years ago vacancy rates in the CBD were rising in response to cuts by the federal government, until one significant event started a turnaround.

“Shopify (SHOP-T) committed to occupy 234 Laurier (Ave. W). That looming vacancy, which not so long ago would have been swept up by the feds, was actually going to be fully occupied by millennials along with longboards, lattes, and jeans (with) a culture where work-life balance is paramount and 30 is considered old,” said Smith.

Other successful tech companies have followed. The shift, he said, has brought overall vacancy to 7.1 per cent in the CBD, and class-A vacancy down to 4.1 per cent.

Urban tech is the second-largest occupier of space downtown, behind only the federal government.

“There’s a huge game of musical chairs in the downtown core where a lot of people thought, once they came in, they would take different buildings than government,” said Jessica Whiting, a sales representative from Colliers International.

She doesn’t believe the trend is a fad, nor that it’s simply growing companies taking advantage of vacancies caused by a downsizing government. It’s indicative of the needs of a changing workforce.

“They’re here to stay. I think culture is very important to them and the downtown core offers that live-work-play environment,” Whiting said. “A big thing in urban tech is recruitment and retention.

“Your brand is your space and having your space in the downtown core is going to help you out.”

Offering that type of culture is an important part of enticing companies to move downtown. In the past, low-cost leasing was the way to go to attract fiscally responsible renters.

However, when Shopify selected a location for its first large headquarters the company turned down an offer in Constitution Square which was 30 per cent less expensive than the brand new (at the time) Elgin St. location it ultimately chose.

Cost often takes a back seat to quality of space for urban tech clients.

Stephen Nicoletti, managing director for Eastern Canada at Manulife Financial, said building owners can’t be afraid to put in a lot of work on their buildings to make them attractive, even if that results in higher rents.

“Getting tenants that have more employees is really what’s going to drive all of our growth, collectively. Anything that we can do in our real estate to reposition our assets so that we are providing the amenities that the labour pool is looking for,” said Nicoletti.

“Tenant lounges, wifi lounges, and gymnasium facilities . . . really cool nifty things that are all about lifestyle. I think those are all aspects that we really need to improve upon. We don’t have a good food offering in the downtown core and we’re looking to change that up.”

Many class-A buildings downtown are well-suited to this sort of redevelopment or refurbishment. Whether this level of investment would trickle down to class-B buildings, to prepare them for urban tech, private sector or government clients, was another topic of discussion.

Susan Rowe, director of leasing in Ottawa for Morguard Investments (MRC-T), said regardless of its class, any building within 600 metres of the city’s soon-to-be-operational LRT line will experience a major shift.

“We have buildings downtown that we are in the middle of putting through LEED certification. We’re doing everything we can to make sure we’re ready for redevelopment and bringing in additional types of tenancies, like mixed-use,” said Rowe.

Nicoletti said Manulife has invested in class-B buildings downtown, believing they can still provide opportunities to attract urban tech. He said redevelopments must go beyond typical upgrades such as corridors and lobbies.

While Shopify has been a case study for landlords looking to appeal to tech, not every company is of similar size.

“The two-, three-, four- and five-thousand-square-foot tenants are the bread and butter of this market,” Nicoletti said. “Those add up and can really contribute to a very successful asset. There’s some great opportunity and we’re pretty bullish on that sector.”

“We would love to see the larger-scale, unfortunately there’s only one Shopify in Ottawa right now,” said Michael Zanon, director of the National Capital Region for GWL Realty Advisors. “Some of my colleagues here have mentioned that some of the buildings have had to, sort of, ween themselves off of the federal government.

“Some landlords have actually made a decision to say, ‘Look, we’ve had feds in here and they hurt us when they vacated, we do not want to lease to the feds again.””

On the government front, there are signs of a resurgence. Upcoming tenders could see the feds absorb up to a half million square feet in the Eastern sector just outside the CBD where vacancy rates are much higher, approaching 20 per cent.

Increased density downtown is already in the works, with major residential/mixed-use developments like Trinity Centre. Add in entertainment facilities at LeBreton Flats (proposed as the future home of a new arena/entertainment complex for the NHL’s Ottawa Senators) and the downtown is expected to become an even more attractive spot for urban tech workers — who will also have LRT to take them to and from their destinations.

These are all seen as encouraging signs, the panelists agreed. Having a choice between urban tech clients who need space quickly, or waiting for government contracts which sometimes take longer to be fulfilled but offer longer terms and stability, is expected to provide more incentive to reinvest in assets.

“I think we have a number of buildings there that need a lot of work and money put into them and we’re starting to see that,” said Sean O’Sullivan, vice-president and general manager, Ottawa, for Bentall Kennedy.

“Finding a mix between these young tech private sector tenants and the feds is the dream for most landlords.”