Calgary’s real estate market has taken a hit over the last few years due to a vicious economic downturn, but Vancouver developers remain bullish about the Alberta city’s long-term prospects. 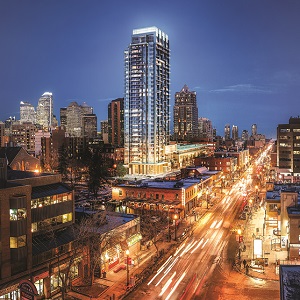 The Royal is being developed in Calgary by Bosa Development. (Image courtesy Bosa)

“Calgary reached a tipping point a few years back with a much larger percentage of the population seeking urban living options versus adding to the car-centric suburban sprawl,” says Ryan Bosa, president of Bosa Development.

“Bosa Development wants to lead that smart growth by providing developments that are urban focal points with homes that change the way people live, so we set our sights on Calgary.

“Today, we are seeing the success of that growth take shape in communities like East Village, offering residents tremendous amenities within easy reach.”

The company’s Evolution project in East Village, adjacent to the downtown core, encompasses two towers of 474 homes with ground-floor retail. It is completed and occupied.

In the Beltline, also in the vicinity of the downtown core, The Royal is a single tower under construction with 223 homes as well as a ground- and second-floor retail podium. It is set for completion in the fall of 2018.

Arris is a two-tower project with a retail podium in East Village as well with 490 homes under construction.

Additional Bosa holdings in East Village will include 800 more homes. Plans for the old Currie Barracks site feature 2,500 units in multi-family buildings with a large component of amenities and up to 200,000 square feet of retail. Start and completion dates for this project are still be confirmed.

Bosa says the company’s commitment to Calgary is long-term and respects the city’s resilience.

“We are immersed in the community to truly understand the impact of the city’s economic cycles – and we prepare and plan accordingly,” he says. “We have been building during the downturn, which helps create jobs and keep us ahead of the cycle to have inventory ready for the next positive upturn.

“We believe the worst is behind us; however, it will be a slow recovery and a buyer’s market.

“Bosa Development will continue to be immersed in Calgary and lead smart growth. Smart growth is about limiting urban sprawl and creating livable, inclusive communities that offer everything within reach, which ultimately gives people more time and flexibility in a day.

“These communities also help create social connections, which in a time of a downturn, can be especially important.”

Anthem also has two sites tied up for consideration in the neighbourhoods of Hillhurst and Lincoln Park, with a cumulative potential of 225 homes.

Eric Carlson, CEO and core founder of Anthem and CEO of Anthem United, says the company is a geographically-diversified developer currently operating in four cities.

“Alberta is a steadily growing market, subject to ups and downs, and the cities of Edmonton, Calgary and Vancouver are all within a short flight of each other so it’s easier for the three Canadian cities to stay connected,” says Carlson.

“Alberta has good people, good infrastructure, and it’s affordable. Families will move here. Edmonton and Calgary will grow. We don’t picture a boom . . . but we picture steady progress.

“You don’t need home runs to win a ball game. You can do it with singles and doubles.”

Carlson says the Calgary market is slow and steady. It has turned a corner but it is one that is very slow, long and rounded. The recession is over and there has been a major adjustment in the city to the shock of a massive reduction of energy prices, the failure of pipeline policies within Canada and the U.S., and the uncertainty caused by the election of an NDP government in 2015.

“Yes, of course prospects are better today after the economy has adjusted to those shocks, but there is still a long way to go. That shock lost a lot of good, high-paying Calgary jobs and the people affected, if they stayed here, need to still be absorbed back into the economy in a meaningful way,” he says.

However, Carlson adds Calgary offers numerous positives for future real estate growth including scenic geography of rolling hills, bisected by the Bow River; impressive infrastructure; houses that cost less than half of those in Vancouver and Toronto; a steadily improving city and population and job growth.

“We can develop land, build homes and create work and retail space  and find people to buy or rent. And so we are in business. And so we are here,” says Carlson.

Michael Hungerford, a partner in the company, says its interest in recent times in Calgary has really been in earnest since 2012.

“It’s the same attraction that we still have today . . .  Calgary being such an important part of the regional economy, we feel strongly in the long-term potential of the market,” says Hungerford. “So we want to participate in that long-term potential and are committed to being in Calgary for the long term.

“Of course, there’s a big speed bump called the oil price adjustments but Canada as an overall country has performed very well through difficult times and Calgary, and Alberta, has proven itself resilient in times of change in the past.”

Hungerford says the company has continued to build its Calgary presence in recent years with a number of transactions and it will soon be announcing additional acquisitions.

“We have a diversified strategy even within a market and in the case specifically for Calgary we’ve tended to do more industrial projects. We’ve always believed in Calgary as a logistics centre for the region. . . . We also like residential in Calgary. We’ve got a number of sites that have residential potential for when the market is ready for those sites.

“I think we’re positioned well to take part in that residential recovery.”