Calgary’s multicultural New Horizon Mall to open in May

A unique multicultural mall in the Calgary region will open in May with more than 500 businesses which have purchased their spaces in the shopping centre, as opposed to the traditional retail practice of leasing. 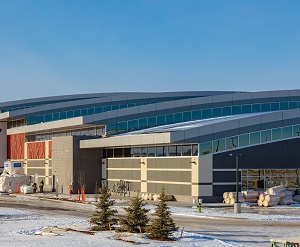 The multicultural Calgary New Horizon Mall is slated to begin opening in May. It’s 500-plus vendors will own their stores, not rent as in most retail shopping centres. (Robert Moroto photo)

New Horizon Mall, which is located along the Queen Elizabeth II Highway just on the outskirts of Calgary limits and in the Balzac area of Rocky View County, is 98 per cent pre-sold. It’s located near the CrossIron Mills shopping centre.

Eli Swirsky, president of The Torgan Group, which is developing the New Horizon Mall with the MPI Property Group, said the developers found the model to be very successful when it was launched in September 2014.

“The concept works, as we are almost sold out of stores,” he said.

Swirski said the mall will be completed by May, but store openings will be phased in until the summer.

“Not everybody is going to be in place. It’s going to take time to ramp up a mall like that, but everybody will be able to see this exciting new mall that’s coming to Calgary,” said Swirsky.

“It will be open in May but it will not be fully operational because a lot of the people will be closing (their unit space purchases) . . . and what we envision is a grand opening, an official opening, sometime in the summer  . . .  The whole month of May will be people getting their keys. We’ll be closing something like 25 units a day.”

The smallest unit is about 145 square feet, with the largest about 500 square feet.

There are more than 350 underground parking stalls as well.

Swirsky said New Horizon Mall provides a unique opportunity for retailers to buy the store they occupy. As well, smaller merchants are often left out when it comes to setting up shop in a bigger mall.

“(Retailers) have the freedom to operate the way they see fit,” he said. “That’s very unusual and unique, especially in a mall setting. They certainly have the right to do that … if they own their own space.”

The New Horizon Mall will benefit both from the large amount of traffic along the busy Queen Elizabeth II Highway as well as its close proximity to CrossIron Mills, which opened in August 2009.

Ontario-based Torgan Group was founded in the early 1980s by Swirsky and Sam Cohen. It has been involved in the development, ownership and management of more than 70 commercial projects totalling in excess of 3.5 million square feet.

Torgan is the largest privately owned developer and owner of medical centres in Ontario, and has also been involved in retail plazas, enclosed shopping malls, office buildings and institutional (courthouses).

This is not Torgan’s first multicultural, or international-style shopping centre, having also built the Pacific Mall in Markham, Ont. At more than 270,000 square feet, Torgan calls Pacific Mall the largest Chinese-style mall in the Western world and remains a recognized tourist destination.

U.S.-based MPI Property Group has been developing real estate across North America for more than 25 years. The company has developed many large-scale residential, commercial and retail projects throughout Canada and the U.S.