Data services provider WPP has signed on as the anchor tenant for the Waterfront Innovation Centre, a 400,000-square-foot-plus office development which will bring more than 2,000 employees to Toronto’s waterfront. 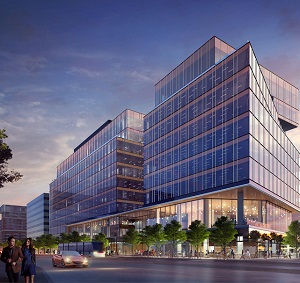 “Having beachfront offices in Toronto is extremely rare,” said Sean Menkes, development manager for Menkes Developments, which is partnering on the complex with Alcion Ventures, in collaboration with Waterfront Toronto.

“The building sits on Toronto’s revitalized waterfront adjacent to Sugar Beach and the Martin Goodman Trail, yet is only steps away from the financial core. Access to talent is critical to companies, and the building’s proximity to Union Station and the growing waterfront neighbourhood were big draws.

“Also, because of its location within the East Bayfront community, employees in the Waterfront Innovation Centre will have the opportunity to live in the same community where they work, fulfilling a growing demand in Toronto for downtown live-work-play neighbourhoods.”

The Waterfront Innovation Centre was designed by architectural firm Sweeny & Co. It will have open concept layouts to foster collaboration and the exchange of ideas through shared resources, as well as a conference centre. It will also have an ultra-high-speed broadband community network and state-of-the-art technology infrastructure.

“The Waterfront Innovation Centre is the tipping point that will elevate the East Bayfront as a new, exciting office node in Toronto,” said Menkes. “Along with our neighbours, we are redefining what the waterfront means to the city.

“Waterfront Toronto’s vision for the area is coming to fruition, and it will be something that we can all be proud of.”

“The Waterfront Innovation Centre contributes to the overall goal of waterfront revitalization as a driver of economic development that will help Toronto compete on a global scale for investment and talent,” said Waterfront Toronto communications and public engagement specialist Meghan Hogan.

“Our vision for the eastern waterfront, including East Bayfront, is to make it synonymous with innovation. The centre advances the innovation and creative ecosystem of the area that already includes Corus, Pinewood Studios, George Brown College, Daniels Launchpad and Quayside.”

WPP provides a comprehensive range of data-driven services in areas including digital, e-commerce and public affairs. It plans to occupy approximately 260,000 square feet in the Waterfront Innovation Centre, which will enable it to consolidate 19 downtown Toronto locations under one roof. The transaction was brokered by CBRE Ltd.

Construction of the Waterfront Innovation Centre will begin soon, with completion scheduled for the third quarter of 2021. The site, at 125 and 155 Queens Quay East, is located 150 metres east of Menkes’ Sugar Wharf Condominiums development.

The Waterfront Innovation Centre will be comprised of two structures.

“The majority of the space available is highly coveted space in the Exchange, with waterfront views,” said Menkes. “We have had a great deal of interest following the announcement of WPP.”

The two structures will be connected by the second-floor Nexus, a collaboration area with several work environments, a conference centre and a direct connection to Sugar Beach. Menkes described Nexus as “unique to our market,” and he envisions it fostering innovation and collaboration among its tenants.

“Retailers will be selected to service the needs of the office tenants as well as the neighbouring population,” said Menkes. “There is an incredible 7,000-square-foot restaurant opportunity directly on Sugar Beach.”

The Waterfront Innovation Centre’s proposed design and energy-efficient systems are projected to save 46 per cent in energy consumption compared to a typical office building.

It will feature floor-to-ceiling glass, allowing for maximum natural light penetration, and both direct and indirect lighting with occupancy/daylight sensors to save electricity costs.

“It will have solar panels on the roof, as we have done at One York Street, which was the first-of-its-kind installation in Canada,” said Menkes. “One York really set the bar for us in terms of sustainability, earning the highest LEED score ever for an office building in Toronto.

“We plan to improve upon that even more with Waterfront Innovation Centre.

“Water management is a high priority. The base building washrooms will feature low-flush automatic toilets, low-flow urinals and low-flow lavatory faucets with automatic shut-off. The collected rainwater of a large cistern installed in the building will supply water for all toilets and urinals in the office tower.”

Menkes Developments was founded in Toronto in 1954 and is a fully integrated real estate company involved in the construction, ownership and management of office, industrial, retail and residential properties. Its primary focus is on the Greater Toronto Area.

Boston-based Alcion is a real estate investment manager founded in 2005. It targets seven major North American cities and invests on behalf of major institutional investors, including public and private pensions, endowments and foundations, and high-net-worth individuals.

Menkes and Alcion have previously partnered on several projects, including Telus at 25 York St. and the Four Seasons Hotel & Residences in Toronto.

The federal, provincial and municipal governments created Waterfront Toronto to oversee and lead the renewal of Toronto’s waterfront.