Arch Lofts, a Toronto church to condominium conversion that was delayed and renamed, is hosting a preview this weekend in advance of first occupancy in July. 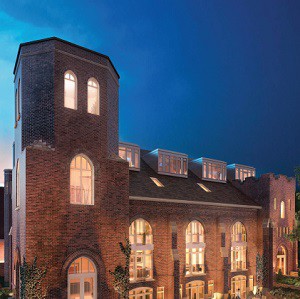 The Arch Lofts and Vestry Building in Toronto are nearing completion. The project includes renovation of the 1913 Perth Avenue Methodist Church and creates 39 residential units.

“Arch Lofts is an intimate-scale project of only 39 units in an established residential neighbourhood that’s well-connected by transit and paths,” said Windmill Development Group partner Alex Speigel. “The design is unique and the conversion also makes each of the suites unique. There is a balance of modern interiors to this beautiful heritage building that is rare in Toronto.”

The development at the intersection of Wallace and Perth avenues in the Junction Triangle neighbourhood was originally called Union Lofts when it first went on the market in November 2012 with an expected completion of November 2014. However, construction delays and other setbacks put the conversion of Perth Avenue Methodist Church, which was built in 1913, on hold.

Initial purchasers were given first priority and a $20,000 discount for the relaunched Arch Lofts, for which construction was remobilized last September. Prices for one-bedroom units now start in the mid-$300,000 range and rise to the $700,000s for larger suites.

Speigel wouldn’t say how many original Union Lofts purchasers have bought into Arch Lofts, which is being marketed by Paul Johnston.

The 43 units in the original plan were trimmed to 39 in the redesign to include larger layouts and more two- and three-bedroom suites. In addition to the church, slated for occupancy at the end of October, the development’s newly built Vestry Building should be ready for move-in at the end of July.

Each suite will include premium finishes throughout, including kitchens by Scavolini, with integrated appliances, large islands, engineered hardwood and spacious bathrooms. Most also include outdoor balconies and terraces.

Ottawa-headquartered Windmill focuses on green development and the conversion of the church into Arch Lofts fits well into its mandate.

“Converting buildings means less waste going to landfill and keeping the embodied energy of the original building,” said Speigel. “There are other benefits, such as preserving our heritage, creating less disruption to the neighbourhood and gaining greater community acceptance through the approval process.”

Arch Lofts will include a geothermal heating and cooling system that has near zero emissions. Energy recovery ventilators in the suites will provide generous fresh air with heating exchange in winter and cooling exchange in summer.

“Working with heritage buildings can be challenging because there are some improvements that are limited,” said Speigel. “For example, old walls can’t be radically altered without damaging them.