Windmill Development Group has been chosen to partner with the City of Guelph, Ont. on the planning, design and development of the Baker District. 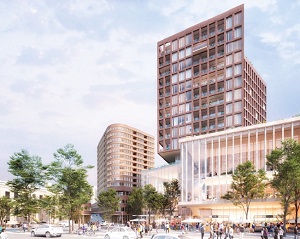 Windmill Development Group has been selected to lead a team which will develop Guelph’s Baker District. (Rendering courtesy Windmill)

“We’re very excited about it,” said Windmill partner Alex Speigel. “It’s quite a large project of about two city blocks in downtown Guelph.”

The development team, led by Windmill, includes Diamond Schmitt Architects, architecture, landscape architecture and urban design firm DTAH, and Urban Equation Corporation. The companies, which have worked together before, will work closely with the city and Guelph Public Library to arrive at a final plan for the development.

The City of Guelph invited four shortlisted development teams to submit proposals for the Baker District last spring and chose Windmill. It will negotiate a development plan with Windmill and its partners, which will include input from the public, which will be presented to the local council for consideration and direction in 2020.

Plans for the Baker District

The Baker District redevelopment is a City of Guelph development project aimed at transforming the existing parking lot and properties fronting the north end of Wyndham Street into a unique mixed-use development.

“The plan is to have a library there, residential use, some retail use, a public park, and we also have some interesting institutional partners. A school and a community facility are also looking to locate there.”

Windmill will own and develop the residential and commercial components and partner with the city in developing the public components, which include the library, parking and public plaza. The city will support the development of the site by completing technical studies, environmental site preparation and upgrades to off-site infrastructure.

Market research has demonstrated interest in downtown Guelph among young professionals and empty nesters seeking to live in a walkable urban neighbourhood. The southwestern Ontario city, located between Toronto and Kitchener-Waterloo, has approximately 130,000 residents.

Two residential buildings, one on the north side of the site and one on the south of a new public street, will provide approximately 275 residential units to support the city’s intensification goals. A component of the suites is planned to accommodate affordable housing.

Urban Equation will be a key player in designing a sustainability framework based on the One Planet Living principles. The company, which recently signed on to assist Sidewalk Labs in Toronto, has been a leader in North American sustainable real estate advisory services since 2003.

Ottawa-based Windmill is a development company that harnesses innovations that optimize the use of land, water, air, energy and building materials towards a goal of zero ecological footprint buildings. All of Windmill’s projects have achieved LEED Platinum certification.

“Guelph is a very engaged community that’s very interested in local businesses, sustainability and environmental concerns,” said Speigel. “We’re very closely aligned with them on our approach to the project and their values.”