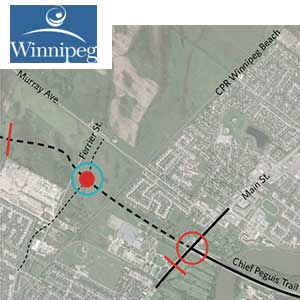 Winnipeg’s proposed inner ring road has been decades in the making. Even today as the final planning touches are being put on a key piece of the city’s transportation plan, the completion of Chief Peguis Trail remains more than a decade away.

Once finished, the extension will serve as a key transportation corridor, a key link in the north that has been sorely lacking in the Manitoba capital.

Named after an Anishinaabe chief who signed the first treaty in Western Canada, the completed freeway would provide tremendous opportunities for development offering access to largely untouched stretches of land in Winnipeg’s northwest.

“When you look at the proximity of these lands to this corridor and the core of the city, obviously, the extension will help open up all that to development,” says Sandy Shindleman, president of Shindico, one of the largest commercial real estate companies in the city.

He should know. Shindico developed a strip mall along the already-built portions of the Chief Peguis Trail in the city’s east end.

It’s “about an 18,000-square-foot strip mall there that enjoys that traffic coming over (Chief Peguis) bridge,” he says, adding Dollarama and Starbucks — two key tenants — are good examples of the kind of commercial development opportunities available once the extension is complete.

Businesses that encourage high-frequency visits and offer services that cannot be easily purchased online are likely to be the greatest commercial development plays along the 10-kilometre extension. These would mostly serve the residential communities that already exist, or would be constructed as a result of the extension.

In fact, Shindleman says the extension would likely spark a residential development boom in the city’s northwest.

“The highest and best use for most pieces of property in Canada is residential,” Shindleman says, adding malls and big box stores are becoming less attractive to develop as online retail continues to grow.

While the Peguis extension will connect with a major north-south artery in the city’s west end, essentially completing the inner ring road, it will facilitate the construction of large subdivisions in an area of the city with plenty of undeveloped land.

And all those new homes “will also enhance the trade area and market capture for a lot of the existing retail and commercial” along McPhillips Street, one of Winnipeg’s major traffic arteries.

However, one urban planning expert says the extension makes less sense with every passing year.

“Winnipeg has planned many things over the years, and the only thing they seem to hold onto as a project is this inner ring road that the Peguis Trail is part of and, at this point, it seems like its primary function is opening up new lands for development,” says Richard Milgrom, associate professor and head of Department of City Planning at the University of Manitoba.

He adds the ring road made sense decades ago when expansive development was considered the ideal. But times have changed, he argues, and the development likely to occur along the Chief Peguis extension does not address existing problems Winnipeg faces.

“I would argue that as we continue to develop the periphery of the city, we’re ignoring the centre, and economically that’s not a good thing.”

The extension is good news for single-family home builders, Milgrom says. But for the overall development of Winnipeg, this sort of development tends to sap vitality from core areas.

“And if you weaken the centre, you’re weakening the overall economic viability of a city, especially if you want to attract new businesses and people to come here.”

Still, the extension is an important east-west link, providing access to industrial parks in the west near the Winnipeg James Armstrong Richardson International Airport, according to city documents. And indeed from a developer’s perspective, the project remains a worthy endeavour, Shindleman says.

“But it has moved at a glacial pace – basically it’s been a largely ignored opportunity municipally for at least a generation.”

Today, however, the planning phase is finally coming to a close. Winnipeg city council is expected to approve the final plan in early 2018. The first phase of extension should be “implemented” in 2021 with the final stretch expected to be complete about a decade afterward, city documents estimate.

Indeed, Chief Peguis Trail’s completion has been a long time coming – and it still has a ways to go. But it will be worth the wait, Shindleman says.

“Good things are happening throughout the city, and some projects (like Chief Peguis Trail’s extension) which have been in the planning for decades are finally getting done, and that’s nice to hear.”