A 58,000-square foot Sobeys grocery store opened in Winnipeg’s Fort Richmond Plaza on Jan. 29, and the expectation is the shopping centre will be entirely leased within the next two years. 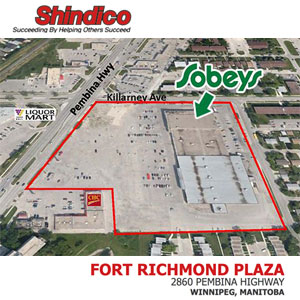 “There are older portions of the shopping centre that are already fully leased,” said John Pearson, a broker for ICI Properties and Shindico Realty Inc.

“The portion that’s new in front of Sobeys is where we have five pending deals that are active right now. Then there’s the old Zellers building south of Sobeys that we’re re-tenanting. We have a couple of proposed tenancies for it.”

Leasing opportunities range from 1,000 to 90,000 square feet on the 12.1-acre site that has rare C4 zoning and more than 700 parking stalls. Pad site and build-to-suit opportunities are available for qualified tenants.

“Lease rates vary dramatically depending on the size of the space, whether they have drive-throughs, and positioning on the site,” said Pearson. “It’s all over the map.”

Fort Richmond Plaza is located at 2860 Pembina Highway, just south of the University of Manitoba with its more than 35,000 students and staff, as well as Investors Group Field, the home of the Winnipeg Blue Bombers’ Canadian Football League team. It’s across the street from Richmond West Shopping Centre, which is anchored by a Manitoba Liquor Mart and an RBC Royal Bank branch.

There are almost 123,000 people living within a seven-kilometre radius of the Fort Richmond Plaza site, according to the 2011 census, while a 2012 City of Winnipeg Transportation Department report indicated there were 31,700 vehicles per day on Pembina Highway between Killarney Avenue and Dalhousie Drive.

“The centre is very attractive because Pembina Highway is the route that becomes Highway 75, which is the main connection between Winnipeg and our neighbours to the south,” said Pearson.

Prime location and a new subdivision

Fort Richmond Plaza is also close to the emerging Waverley West subdivision, which is already extensively built out. It had long-term plans for more than 11,000 homes when development began, and Pearson said “they’ve significantly outpaced their projections for growth.”

Winnipeg withstood the closure of four large Target stores, two Future Shop outlets and other smaller retailers last year, and Manitoba as a whole has a more stable and predictable retail real estate market than the more oil and gas-reliant provinces of Saskatchewan and Alberta.

“We’re holding our own,” said Pearson.

“Resources are affecting all of the Prairie provinces, but Manitoba has strong agriculture and very diversified manufacturing. It’s a very diversified economy and we haven’t seen the layoffs that are occurring in our neighbouring provinces.”