Devron Developments is targeting homeowners looking to downsize in Toronto’s Lawrence Park neighbourhood with its new boutique condominium, The Winslow. 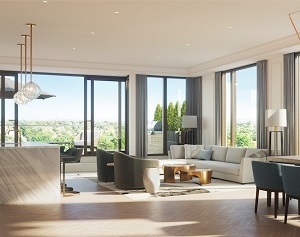 Rendering of a suite in The Winslow in Toronto. (Image courtesy Devron)

The Winslow will be located at 2781 Yonge St., between Blythwood Road and Lawrence Avenue, on a site most recently occupied by two semi-detached homes, a parking lot, a three-storey investment building and a two-storey commercial building. Devron acquired the property from an individual landowner in January 2017.

“It has a really interesting balance between urban and residential, and having some intimacy,” said Safapour.

Safapour believes the site’s proximity to restaurants on Yonge Street — and single-family Georgian and Colonial homes, parks, and a ravine just off of it — will appeal to those who already reside in the area but are looking to downsize without having to move into a small condo.

“We see a big part of our demographic being folks who already live in Lawrence Park and are looking to make a lifestyle change. What they need is space but, from our conversations with them, they don’t need a lot of bedrooms.”

The Winslow will feature 69 individually metered suites in nine storeys. They’ll range from just more than 1,000 square feet to 5,000 square feet. The mix will be predominantly two-bedroom and two-bedroom-plus-den, with some three-bedroom suites.

Pricing and condo fees are still being worked out before the sales launch takes place in the next few weeks, but Safapour said suites should start in the neighbourhood of $1.5 million in the ERA Architects-designed building.

The Winslow’s suites will feature high ceilings, open floor plans, punched out floor-to-ceiling windows, natural stone counters and engineered wood flooring, while the intimate lobby will be cloaked in marble.

Sustainability is a priority for Devron, which will target a LEED Gold or Silver certification for The Winslow. The building will feature a predominantly stone envelope, large water filtration capacity, a large back-up generator, energy-saving measures and soundproof insulation.

II By IV Design is overseeing The Winslow’s interiors, while Janet Rosenberg & Studio is responsible for its landscaping.

The Winslow’s amenities will include a guest suite, a small fitness room and a multi-function social room and lounge with a full kitchen and large dining space that connects to an outdoor terrace and barbecue area.

“With an average suite size of 1,500 square feet, you can host a decent-sized party in your own unit,” said Safapour. “That’s usually a challenge in a typical condo, which is why you need to have larger and more amenities for people to host a function.”

The type of owner The Winslow is expecting probably already belongs to social or fitness clubs if they’re interested in those types of things. Many of them are also likely to be travelling or at second residences much of the year, so Devron didn’t see a need for lavish amenities which would significantly boost fees.

Family-owned Devron started by building custom and luxury homes, and it has carried that background into its mid-rise and high-rise multi-family residences in the Greater Toronto Area. Safapour said many condos are now seen as commodities for investors, whereas most buyers at Devron buildings plan to live in them for the long term.

Devron has started construction on the 25-storey The Vanguard at 7089 Yonge St. in Thornhill. Occupancy is expected in late 2019 in the LEED Gold-targeted, family-oriented building which will feature retail in its podium.

The Kirkor Architects & Planners-designed Vanguard was more than 90 per cent sold when it was given permission to add two more storeys. The units for those additional floors haven’t yet been released for sale.

Devron is partnering with Great Gulf on 101 Spadina, a 47-storey mixed-use building designed by Diamond Schmitt Architects at Adelaide Street West that’s in the early zoning stages. Safapour said the goal is to have larger suites than other condos in the area at the western edge of Toronto’s entertainment district, and to retain the character of the neighbourhood through the use of brick.

“We’re targeting a demographic which is unique to that area that wants to be close to entertainment and work and play, but at the same time doesn’t necessarily want to be in a 500-unit building with neighbours that come and go. It will be geared to more end users who are there to stay.”

While Devron is planning another boutique condo on Yonge Street south of The Winslow, Safapour said it’s too early to reveal any details.