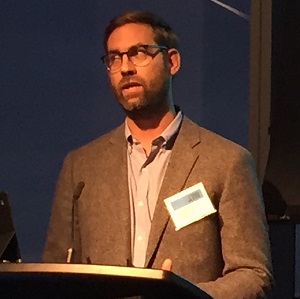 Arie Barendrecht is the CEO and founder of WiredScore. (RENX photo by Steve McLean)

“These are Toronto’s leaders in digital connectivity,” said WiredScore chief executive officer and founder Arie Barendrecht at an Oct. 26 launch event at The Globe and Mail Centre.

“Our launch partners have created buildings that more than match the excellence of any that we’ve seen across the world. They’re building owners that truly understand the needs of tenants now and in the future. Their commitment to connectivity will allow tomorrow’s businesses to thrive.”

Barendrecht founded WiredScore, the organization behind Wired Certification, in New York City in 2013 in partnership with Mayor Michael Bloomberg.

“What Mayor Bloomberg realized, along with my team, was that a city needs to offer connectivity in its office buildings or it’s going to lose out on tenants,” said Barendrecht. “Businesses are going to go elsewhere. It’s paramount that a city and the city’s landlords are providing this in their buildings.”

WiredScore has since spread to more than 80 American cities as well as London, Paris, Berlin, Dublin and now Toronto.

Wired Certification has become an internationally recognized rating system for commercial real estate that helps landlords design and promote their buildings’ digital connectivity and technological capacity to tenants. Wired Certified buildings include the Empire State Building in New York City, The Shard in London, DUO in Paris and Willis Tower in Chicago.

“Globally, we work with more than 350 million square feet of real estate from over 200 landlords,” said Barendrecht. “I think the thing we’re most proud of is that over four million people work in Wired Certified buildings across the globe.”

According to WiredScore, Internet connectivity, cost and location make up the three most important factors for tenants searching for office space.

Barendrecht listed the connectivity factors that matter most to tenants: fast Internet set-up times; competitive Internet pricing for the speed required; and a resilient connection to the Internet.

“Landlords are using Wired Certification to demonstrate to current and prospective tenants that their buildings meet these three requirements and more,” said Barendrecht.

In addition to applying its ratings, WiredScore also helps commercial owners understand and improve the digital capacity of their buildings and works with developers to design best-in-class connectivity for new developments or redeveloped properties.

Toronto as a technology hub

Barendrecht said WiredScore is excited about moving into Toronto, which was ranked by Expert Market as one of the world’s three best technology hubs for living and working.

“According to CBRE, Toronto is the fourth-largest tech market in North America, but is the fastest-growing in 2017 in terms of new tech jobs created,” said Barendrecht. “The Greater Toronto Area (GTA) will soon be producing more than 50,000 graduates annually in technology, engineering, mathematics and science — more per capita than any other city in North America.”

Further confidence was recently shown in Toronto when Google sister company Sidewalk Labs signed a deal to map out a new kind of neighbourhood on the city’s waterfront to demonstrate how data-driven technology can improve the quality of city life.

“If there’s anything that Toronto and the city’s landlords need to get right to continue this incredible momentum, especially during a time of rapid innovation, it’s a focus on digital connectivity,” said Barendrecht.

“Connectivity is the lifeblood of modern business. It’s our connection professionally and personally to the world around us. Connectivity provides us with the ability to leverage cloud computing, mobile communication, augmented reality, virtual reality and e-commerce.”

A WiredScore-commissioned Addison Research survey of 200 office workers at mid- and large-size companies in the GTA found 99 per cent said access to reliable Internet service is critical, while 95 per cent said Internet outages or poor connectivity negatively impacted their companies and themselves.

Twenty-two per cent of respondents said they experienced connectivity problems on a weekly basis.

“We have something that we know is super important to our businesses, but yet everyone knows that it’s not great and not working the way that it should,” said Barendrecht. “That’s a massive problem and it’s the reason why I created WiredScore.”

Occupied buildings, developments and redevelopments are eligible for Wired Certifications, which are valid for two years.