Automotive Properties REIT (APR.UN-T) has closed three acquisitions worth $41.3 million in the last month as part of what president and chief executive officer Milton Lamb calls a “thoughtful approach” to growth. 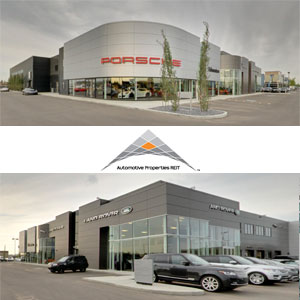 The REIT held its initial public offering in July with 26 income-producing commercial properties and has since acquired Woodland Toyota & Scion in Montreal, Porsche Centre Edmonton and Jaguar Land Rover Edmonton in Edmonton, and Audi Barrie in Innisfil, Ont.

“A lot of our strategy was to make sure that our first acquisitions maintained the quality of the existing portfolio.”

Porsche Centre Edmonton and Jaguar Land Rover Edmonton share a 44,800-square-foot building on a commercial corridor at 17007 111th Ave. that opened in 2014 and was acquired for approximately $23 million from Go Auto. It’s Automotive Properties REIT’s first deal with Go Auto, one of Canada’s largest auto dealership owner/operators with 40 locations in Alberta, British Columbia and the Northwest Territories.

Audi Barrie is a newly constructed, 25,000-square-foot dealership located on 3.1 acres along a commercial corridor neighbouring other luxury car dealerships at 2484 Doral Dr. in Innisfil that was purchased for $11.1 million.

It was one of the three development properties owned by Dilawri Group of Companies, Canada’s largest auto dealership operator, at the time of Automotive Properties REIT’s IPO. The REIT has a right of first offer to acquire any REIT-suitable properties from Dilawri’s property development pipeline, and Audi Barrie is the first to be picked up.

Woodland Toyota & Scion is a 50,000-square-foot dealership in Canada’s second-largest auto market and was acquired for approximately $7.2 million. It was completed in 2008 and is located in a commercial corridor at 1000-1039 Woodland Ave. in Montreal.

“When Dilawri acquired the dealership, we acquired the real estate,” said Lamb. “That wasn’t part of the original pipeline.”

The two other development properties that are part of Automotive Properties REIT’s strategic alliance agreement with Dilawri are Calgary Honda and Barrie Volkswagen dealerships still under construction.

“It will probably be sometime in 2016 that we’re provided with the option to try to do a deal,” Lamb said of the two properties. “We can elect whether to proceed or not, but certainly it will be high-quality real estate.”

Lamb said Automotive Properties REIT would like to acquire more properties in Montreal and believes there will be new opportunities in Alberta. Other potential cities for the REIT to enhance its geographic diversification include Ottawa, Kitchener-Waterloo, Halifax and Victoria.

Last year set records for car sales in Canada and there’s anticipation 2016 will be on par with it. There’s also an expectation more consolidation will take place within the auto dealership industry as many dealers are retiring. As the only public vehicle in Canada focused on consolidating auto dealership properties, it’s Automotive Properties REIT’s goal to be a partner in this consolidation through carefully considered purchases.

“We just made significant acquisitions and we’re very cognizant of our debt ratio,” said Lamb. “We don’t want to see it above 60 per cent.

“We want to be conservative by nature so we have to watch what’s going on in the market and we’ll take advantage of opportunities that are there, but we do not want to stretch ourselves on leverage.”