Bombardier Inc. will sell its Downsview airport and manufacturing property in Toronto to Public Sector Pension Investments (PSP Investments) for US$635 million. The move is the latest in what the company calls its five-year turnaround plan. 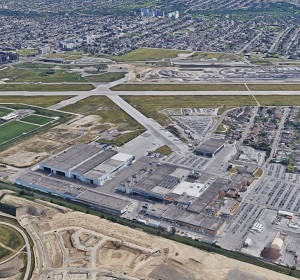 The announcement, made in the company’s Q1 financial report, also says Bombardier has a letter of agreement with the Greater Toronto Airports Authority (GTAA)  for a long-term lease of approximately 38 acres of property at Pearson International Airport where it will open a new centre of excellence and assembly plant for its Global business jets.

Bombardier says the Downsview transaction is expected to close in the second quarter of 2018, and will increase its liquidity by more than $550 million (all figures in US dollars) net of transaction and other associated costs.

“As part of Bombardier’s five-year turnaround plan, we have been reviewing our facilities worldwide to ensure we have the most efficient and cost effective operations necessary to support our growth objectives,” said Alain Bellemare, president and CEO of Bombardier, in a release announcing the moves. “Today, we only use about 10 per cent of a 370-acre site at Downsview and bear the entire cost of operating a 7,000-foot runway.

“So, we are very pleased to have reached agreements with PSP Investments and the GTAA. Together, they allow us to monetize an underutilized asset, further streamline and optimize our business aircraft operations, and will support further economic development and job growth in the Greater Toronto area.”

Bombardier will continue to operate from Downsview for a period of up to three years following closing, with two optional one-year extension periods. On a conference call Thursday morning, Bombardier executives said they hope to have the new site and plant operational within the three-year period.

The company currently operates a manufacturing plant at Downsview, and the site also includes an airport with the 2.1-kilometre runway. The manufacturing plant builds and tests the Q400 turboprop aircraft as well as its Global 5000, 6000 and the new 7000 line of business jets.

Bombardier said it intends to continue assembly of the business jets at the new plant. There was no indication of its plans for the Q400 aircraft, though it is entering into a joint venture agreement for those aircraft with European-based aircraft company Airbus.

Bombardier had acknowledged it was considering selling the Downsview site in January. At the time, the company noted its redevelopment value, saying: “We understand that the property’s unique location, proximity to public transit, major highways, universities and shopping make it an ideal location for employment and other uses…”

Portions of the sprawling Downsview property are short distances from subway stations and a GO Transit (commuter train) stop. York University is also nearby.

“This investment is a perfect fit for PSP as it supports our long-term real estate investment strategy,” said Neil Cunningham, president and CEO, PSP Investments, in a separate release. “We have a stellar track record in working with large, complex projects across our entire investment portfolio, and we are proud of our continued commitment to investing in Canada.”

Currently zoned for “employment” uses, it is nevertheless considered a prime location for major live-work-play types of projects, which could include residential, office / commercial, and retail building in addition to parks and public spaces.

However, PSP Investments will have to apply for rezoning once it determines its plans for the property. In numerous previous published reports, politicians and other groups have indicated there could be opposition to such an attempt, depending on the impact on jobs.

Bombardier purchased the Downsview facility from Boeing about 25 years ago. The site had formerly been owned by the Canadian military.

With more than 69,500 employees across four business segments, Bombardier is one of the largest players in the global transportation industry, developing and building innovative planes and trains.

Headquartered in Montreal, Canada, Bombardier has production and engineering sites in 28 countries across the segments of transportation, business aircraft, commercial aircraft and aerostructures and engineering services. Bombardier shares are traded on the Toronto Stock Exchange (BBD). In the fiscal year ended Dec. 31, 2017, Bombardier posted revenues of $16.2 billion.

PSP Investments is one of Canada’s largest pension investment managers with $135.6 billion of net assets under management as of March 31, 2017.