In Vancouver, there’s a lot of talk about our dwindling industrial land supply. Hemmed in by mountains, ocean, the Agricultural Land Reserve and growing residential demands, the city is struggling to provide enough office and warehouse space for new and existing businesses. 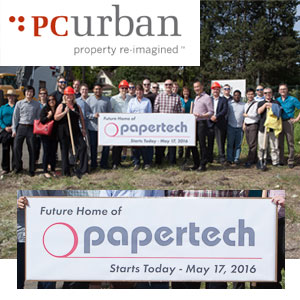 In my last column, CBRE’s Chris MacCauley said there’s an extreme lack of industrial opportunities in this city, whether it’s existing, built product or land to develop future product. And with continued low vacancy rates, there’s a pent-up demand that won’t be satisfied for at least another couple years. What that means is fewer options for buyers, tenants and investors.

So when an opportunity to buy an office or warehouse comes to the market, businesses pay attention. One such business is Papertech, a growing North Vancouver export company that recently decided to purchase and build, despite rising Vancouver real estate prices.

It was been a long-standing dream of owners, Kari and Darlene Hilden, to own their own building as they are squeezed in their current leased space, which is not laid out efficiently for business production. “This new building will be a perfect fit,” says Ms. Hilden. “It will be a larger facility. We can remain on the North Shore and we can design it to meet our needs.”

The new warehouse and office space is being built by PC Urban, a Vancouver developer known for re-imagining old, underused industrial properties into more efficient, modern adaptations. Papertech’s new purpose-built facility will increase their square footage by 30%, feature big windows to allow natural light into the warehouse facility and air conditioning for a more pleasant experience for employees. It will also feature showers for employees who bike to work.

Another highlight of the new building is location. Although not far from their current building, the new Papertech office has a water view, and it is walking distance from the Quay and the hotel that services clients that come in for training. There’s a park across the street. “It’s an industrial area that needs a pick me up,” says Darlene. “We’ll be the newest building on that street – and in the area – and as a consequence, doing our part to revitalize the area.”

“This was an empty lot,” says PC Urban principal, Brent Sawchyn. “And it will soon be a hub of activity for the neighborhood and for Papertech, with 38 on site employees. So our building has created more employment and as a result, will bring a new vibrancy to the area.”

Hilden says she paid top dollar to remain on the North Shore because she is committed to the area, having developed deep roots, living and working here over the years. “It’s just such a great place to live and work,” she says. “But we are designing it to suit our needs and although it’s expensive, at least now, it’s going into our pockets.”