The rush to build on spec in B.C. 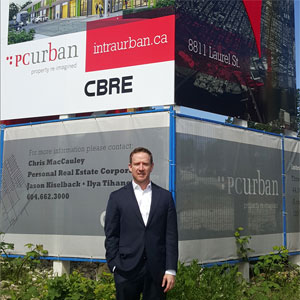 Chris MacCauley has been a commercial real estate broker in Vancouver for more than a decade.

I recently sat down with CBRE‘s senior VP and NAIOP‘s president to chat about the big picture, market conditions and the future of CRE in Vancouver.

Howard: How would you describe the current state of the commercial/industrial real estate market in Vancouver?

MacCauley: It’s a good-news story compared to the industrial and economic markets in general both in Canada and in the world. We’re coming off a record-setting year in 2015, with no slowdown in sight for 2016 or 2017. There’s an extreme lack of product in this city, whether it’s existing built product or land to develop future product.

And vacancy rates are the lowest I’ve seen them – and I’ve been in the industry 11 years. We’re in a spot in our construction cycle where we’re not delivering any new product, so we’re going to have pent-up demand that we won’t be able to alleviate over the next 24 months. That just means fewer options for buyers, tenants and investors.

Howard: What are some other challenges in B.C.’s commercial market?

MacCauley: Our vacancy rate is 2.7 per cent for the entire Metro Vancouver market. The national average is 3.9%. (Calgary is 7.3%) That low is relatively equal to zero because it includes some functionally obsolete buildings. There are no options for tenants in the market right now. Businesses aren’t able to expand or move and new entrants into the market aren’t able to find suitable locations. I believe some existing businesses will make do and put off expansion plans. But some new entrants might look at other ways of servicing the market from other locations and other provinces.

Howard: How are developers addressing that issue?

MacCauley: Most developers with development sites are going ahead and building on spec. We ride these waves when the economy is good, and I’ve seen it before. Developers can’t keep up. Everyone is trying to build as fast as they can, but between permit times and construction, it’s a slow process.

But building on spec is great because the more we can put onto the market, the better. Look at the last few successful projects that were built on spec:

Howard: What’s your prediction for growth in commercial real estate in Vancouver?

MacCauley: With B.C.’s GDP poised to lead Canada, our growth on the industrial side will continue to grow and outpace GDP growth. That’s because one of our major economic drivers, the Port of Metro Vancouver, continues to expand and grow. So we still require industrial properties to facilitate that growth.

Howard: What’s the most exciting project you’ll be working on this year?

MacCauley: Intraurban. It’s the most exciting because it’s revitalizing on old, obsolete industrial area and it will be bringing density and vibrancy into a really developing area of the city. As well, it’s helping Vancouver-based businesses by offering a rare ownership opportunity to stay in the Vancouver market.