President and CEO Brian McCauley says Concert Properties has had its eye on the attractive False Creek Flats neighbourhood in Vancouver for some time as it focuses on areas undergoing transformations. 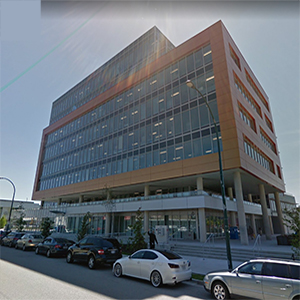 The eight-storey 468 Terminal Avenue was built in 2016, comprises 128,404 square feet and is LEED Silver Certified. The property is fully leased for the next 13.5 years to Canada Revenue Agency.

It is the first asset added in the Concert portfolio in that specific neighbourhood. However, the company does have a residential development a few blocks away.

“That whole area on the east side that’s called False Creek Flats is looked upon as a transformation area for the City of Vancouver,” said Brian McCauley, Concert’s president and chief executive officer.

“They want to attract new employment-generating uses down there. They certainly want to attract the tech sector in addition to other uses. But, it’s primarily an office-incubating space with a little bit of value-added manufacturing there that is mostly tech-oriented.”

McCauley said Concert has been keeping its eye out for potential purchases, either existing properties or sites with development potential, in False Creek Flats “for a long time.” The city recently completed an area plan for the neighbourhood, but McCauley was disappointed it does not allow for much residential development.

“It didn’t allow very much residential to be built in conjunction with the office and retail uses that are permitted in that area, which is a bit unfortunate in today’s world where you’re looking for true mixed-use opportunities in the city,” he said.

“The other piece of the neighbourhood that’s really quite interesting is the potential for St. Paul’s Hospital to relocate just off Terminal Avenue in that vicinity. And that of course would be a game-changer for ancillary uses for medical down in the future if the hospital gets built.

“So it’s a very attractive area and obviously it’s well connected by transit to the downtown core, well-connected to the region by transit, and it’s walkable to False Creek.”

McCauley said Concert will continue to look for more assets in the area. The Terminal Avenue purchase was a perfect opportunity for Concert where things are changing.

“In this market today, first of all, it’s tough to find good assets. One of our business plans for our Commercial Fund and assets in general is to look for opportunities to make our portfolio younger,” he said.

“So whenever we can acquire newly built or relatively modern buildings, we’d like to do that. I wouldn’t say we’re targeted specifically at that location. I think we’re very opportunistic.”

Managing director Andrew Tong said a common theme for properties Concert has purchased through the fund is a path to change.

“Where we see an opportunity where things are changing, whether it’s a development area that’s changing like the False Creek Flats or where lease rates are changing because of market shifting, demand changing, that’s in the path of change, too,” said Tong.

“This (Terminal Avenue building) actually fits both, where it’s in the path of change, the area is completely transforming, and catalysts like St. Paul’s Hospital and others will over time be incredible for the area.

“But, also if you look at the market right now office rents are rising rapidly and what we’ve got here on an asset is lease rates that are below market. We think over time we’ll have an opportunity to capitalize on that for our investors.”

Concert’s residential development near False Creek Flats comprises five residential buildings, including Voda, Navio South and North, the Railyard Housing Co-op and a final landmark building, which is yet to be completed.

The Railyard Housing Co-op is the result of a partnership between the City of Vancouver and Concert. The new building, to be delivered in February 2018, is a 15-storey rental which provides 135 suites of much-needed affordable housing geared toward families.

The company also has a portfolio of seniors residences under the Tapestry brand. There are three completed communities – one in Toronto and two in Vancouver – comprising 463 rental units. A 173-unit residence is under construction in Victoria and construction will begin on a fifth facility, with 135 units, at Niagara on the Lake in the spring of 2019.

“We’ve got a growing presence in seniors’ housing,” McCauley noted, “and we have a series of condominium projects we’ve completed over the years between Victoria, Vancouver and Toronto.”

Concert and the CREC Commercial Fund

Through all its business, it has more than $3 billion in assets and more than $2 billion in shareholder equity and it is exclusively owned by Canadian union and management pension plans.

Concert’s fully subscribed CREC Commercial Fund is a diversified Canadian portfolio valued at about $1.4 billion. Created in 2016, it has 64 assets of about 8.5 million square feet in industrial, office and commercial space.

Its portfolio is spread across the following provinces: Ontario, 57 per cent; British Columbia, 27 per cent; and Alberta, 16 per cent.

Tong said the fund has ongoing plans to expand the open-ended, limited partnership to maximize long-term value for investors by investing in, and managing, commercial and office real estate in Canada.

It was founded in 2010 through a unique partnership involving the City of Vancouver, the Province of British Columbia, union and management pension funds and private investors, with the mandate to provide assured rental housing in British Columbia.

In 1992, Concert entered the condominium market and the company’s structure was also altered. It became a real estate corporation wholly-owned by union and management pension plans.

In 1999, it expanded into the acquisition and development of commercial properties.

Concert opened its Toronto office in 2001 and that same year it began construction on its first Tapestry Retirement Community in Vancouver.